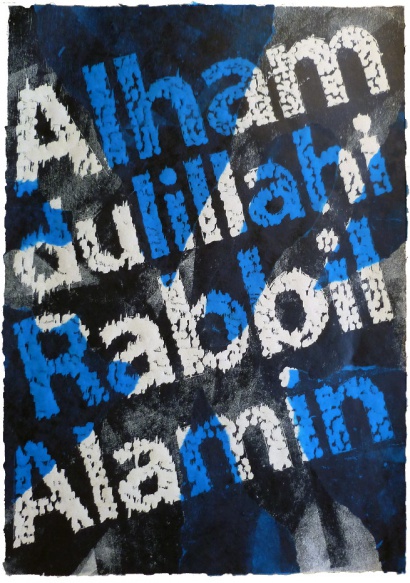 Until my late teens I grew up in a strict Muslim household. My Father was an Imam. From an early age we were instructed in the teachings of the Koran and taught to memorise many prayers, and fasted during the month of Ramadan.

Years later and as an atheist, I reflect upon my Islamic traditional upbringing. The religious indoctrination is deeply embedded still and has surfaced through my work as an artist. My relief prints are based upon my fading memories of prayers and fragments of the rituals that formed the structure of the Islamic faith that influenced every part of my life.

The three works in the exhibition are woodcuts created using a drill, to represent my religious instruction as a child. The orange of the collage areas in one printmake reference to the tradition of the henna applied to my hands at the commencement of the holy month of Ramadan. Layering and fading play a part in the work to communicate the fragmentation.