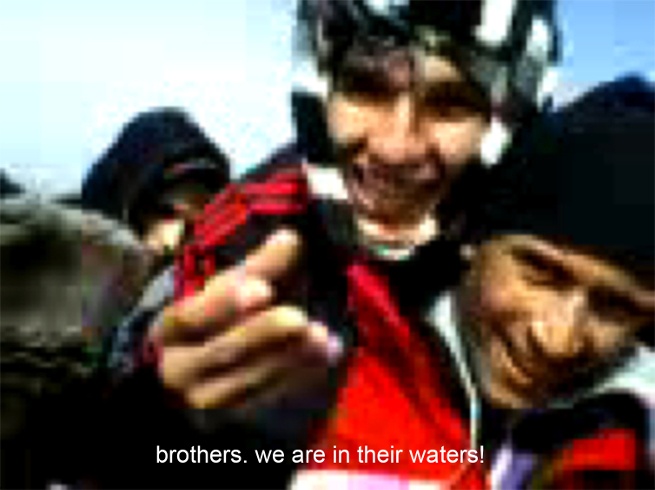 ‘Haraga’ (The Burning), is slang for the phenomenon of illegal immigration by sea. This word has been adopted by the recent surge of youths trying to cross the Mediterranean Sea from the Northern shores of Algeria and into Spain. I met Houari, a 25 year old from Oran, Algeria in August 2013. He and 12 friends embarked on a life-risking journey in late February to reach Spain. They bought a Zodiac, a motor powered inflatable boat, which would run on 120 litres of petrol and set off secretly from a cliff just outside of their hometown of Doueria one night. 18 hours later, a few kilometres  from reaching the shore they were caught by a’ La Guardia Seville’ boat, which was patrolling the sea and had already caught another group of young Algerians trying to cross hours before. They were taken and held in an immigration detention center in Valencia for 45 days, singularly trailed, and then all sent back to Algeria, aside from one who claimed asylum and was granted permission to remain in Spain under the decision of the court.

My recent practice has seen periods of time spent back in Algeria researching, filming and collecting material. I work predominantly through personal encounters, using social structures as mediums which often incorporate the gathering of information, categorising bureaucratic interference, and other methods of informal detection, in terms of realisingenquiries which involve forms of mimetic transaction.

This work attempts an alternative choreography between these present attempts of immigration and, via  reoccurring investigations into Haraga focuses on details of first hand encounters with young Algerian aspirant migrants. . A crossing which is first made remote from reality, is fuelled by two-dimensional experiences based upon virtual representations of ‘The West,’  seducing  its participants into the radical disassociation of every instinctive human constraint Hereby the work is a coming to terms with the possibility of death in its utmost attempt to activate a representation of ‘The Western Dream’.

Rather than declaring ultimate truths, my concepts propose to fuse scenarios which are otherwise restricted, and in realising my work I move through seemingly impenetrable cultural and political strategies.