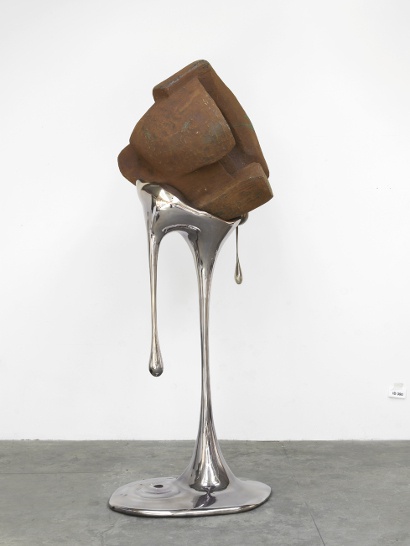 My sculptures explore the ambiguous forces of nature with the principles of sculptural language such as form and balance – often playfully seeming to defy gravity and time. The choice of found materials gives the work a visceral and surreal quality, inviting viewers to experience the decay of man-made structures as nature slowly reclaims her own.

The seemingly heavy, iron-effect forms draw inspiration from man-made objects, from found car parts to discarded metal objects or anything that catches my eye. The current body of work is rusted and decaying; they appear almost as relics of the industrial revolution. These weathered forms contrast with the highly polished chrome-effect of the pulled skin that appears fluid like molten metal, transforming them into otherworldly objects.

Embedded deep within my methodology is this focus on the surface of the sculpture. The surface or skin is slowly being pulled off or has become detached from the sculptural form by some imagined force. The skin often becomes stretched almost to breaking point, capturing an individual moment.

The mirrored surfaces invite the viewer to engage with the sculptures and see themselves distorted in the reflection, inherently adding a further playful nature to the work. Simultaneously, the mirrored surface bounces and bends the image of surrounding architecture. Furthermore, the conscious decision of removing the plinth from the work, creates a constant relationship and dialogue between viewer, sculpture and architecture.