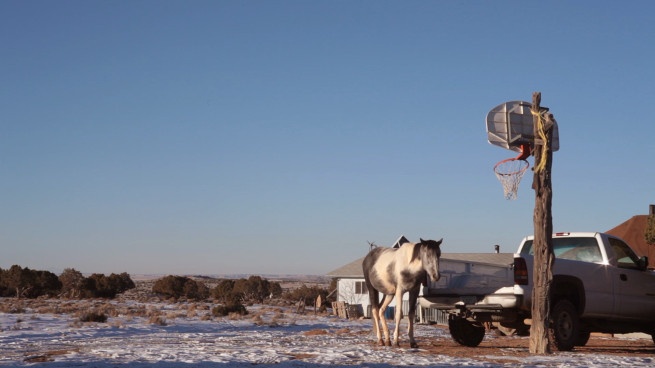 This experimental documentary film installation explores the modern day realities of a small Navajo community in Northern Arizona. Since 1974, their culture and traditions have been significantly impacted by a mass relocation due to the corporate interests of fossil fuel industries and on-going government manipulations.

The film examines and observes these disrupted lives and documents their approaches to defending their land and the culture.

The means and methods of filmmaking bring into question the role of documentary spectatorship and the complex relationship between subject and filmmaker.

Camille’s practice is derived from a strong admiration and respect to people who continue to try and live in harmony with nature.

Her work seeks to examine and explore the changes many of these communities face within the rapidly modernized world and attempts to use the mechanisms within contemporary art to allow for a dismantling and critique of ethnographic documentary practices.

The political realities of the Big Mountain, Black Mesa area was what drew Camille to the area as a political and environmental activist.

Soon, she learnt that it was a deep admiration and respect for the lifestyle, culture and community that kept her returning year after year.

Her practice is an attempt to intertwine both of these contexts: working as a transmitter of political history and culture, engaged with a visual language that expresses the intimate relationship that these Navajo elders have with their surroundings.

Her practice is both highly collaborative and acts to create a discourse between the subjects of the film and affected people.