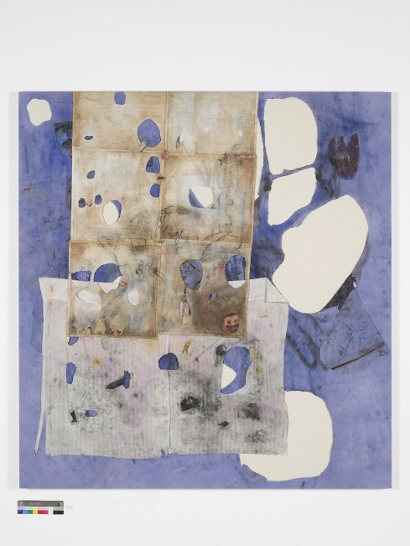 In my work I use autobiographical references and re-contextualise them by combining images and text that I’ve appropriated from popular culture, historical and contemporary literature. By collaging these materials together I am able to create narrative works that take my own subjectivity to navigate issues around contemporary gender politics and social relations.

The works shown in Bloomberg New Contemporaries were created using a variety of multidisciplinary processes; I used photography, drawing, print media and painting to create works that have manifested as 2D collage.

In the large-scale work, Acting Single, Drinking Doubles, (Belladonna Muse), I refer to the process of painting but instead I have chosen to substitute paint for less traditional materials that have their own contemporary connotations, such as Pepto Bismol (a medicine used for nausea, heartburn and indigestion, upset stomach and diarrhoea), red wine, French’s mustard and other substances imbued with particular significance in relation to the body. I also employ the use of image transfers. Specifically, I use a type of craft substance that an amateur fan might buy to make a homemade band t- shirt with. I am interested in using materials that are of the domestic or bodily realm and complimenting those materials with images that pervert ideas of leisure and domestic comfort; I make drawings of caricature-type figures that might inhabit these unsavoury spaces. I also make image transfers out of photographs taken from my own personal archive and mix them with appropriated images in order to push certain innuendoes.

In addition, I am interested in the relationship created when I take explicit, representational images and collage them on top of seemingly abstract surfaces. In my two photographic/print works shown in Bloomberg New Contemporaries, Uncle Lenny’s Lap of

Luxury, (From Behind), and Reunion: Old Boys Hotel Party, I bring together a large-scale image (made unrecognizable because it has been blown-up) and collage it with a partner photograph that is printed at the 4 x 6 inch domestic, photo-album size. Each 4 x 6 image features a middle-aged man in different contexts respectively. Though both men are dressed in luxurious hotel robes and embody a strong sense of presence, the surface on to which their images are attached, complimented with their respective titles suggests something much more narratively complicated.