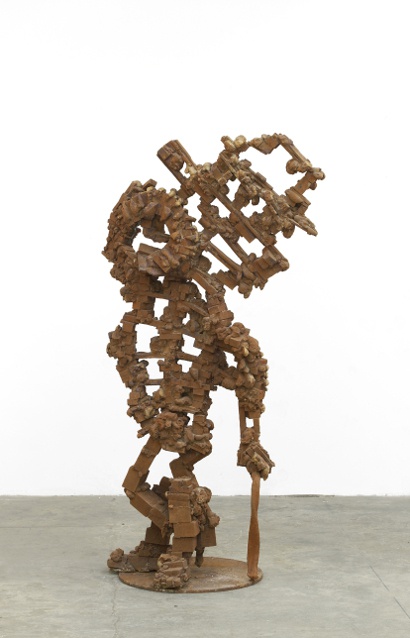 Dirty old man is the culmination of a body of work that addresses issues of gender, status and identity with reference to the role of art and the artist in contemporary society. In an attempt to identify the boundaries between child's play and art work, I developed a working process that fused materials and processes accumulated from different periods of my life. From childhood I took my old Lego bricks , added modelling clay and then used the casting process learnt during my time as a foundry man. The imagery was accumulated from the remnants of my 2D collage work. The subjects became several of my favourite artists and musicians re -imagined as a 'brew crew' drinking together. I saw them as becoming friends through their proximity on my shelves at home, sharing drinks and ideas. Low company and high art united in vice.

This particular piece goes further in exploring the problematic status of public sculpture by mocking or rejecting its affirmative  role. Drawing a comparison between the dirty old men drinking, pissing and smoking in the park, and the bird shit stained monuments of forgotten dignitaries that share our public spaces with them.dirty old men together? This piece withholds commemorative or inspirational purpose and instead revels in the transgressive desire to embody entropy, decay, filth and ribald humour. Public art, as exhausted tradition, becomes the ideal vehicle to express our monstrous otherness.