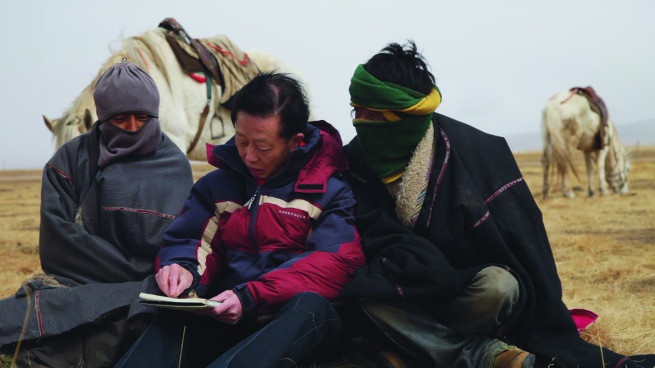 Shen Xin has selected a program for BNC2014 entitled Unorthodox Hosts, featuring works that privilege the act of problematizing as embodying potential.

Shen’s work presses on the urges of positioning oneself when engaged in different dimensions of heavily politicised issues. The artist attempts to adopt an “unorthodox” approach that is driven by scepticism towards the functional performance of politicalcorrectness. ForShen, it is an active way of participating in the discussion of the common, the autonomous way of living as human beings. This theme isapplied in her works to examine collective experience of trauma, such as the construction of anger among the Chinese nationals toward the Japanese war crimes during the Second World War, as well as her relationship with a Chinese immigrant worker in London that was exclusively beneficial to her. Most recently, Shen has been using the language of documentary filmmaking to apply the act of dis/reclaiming regarding the issue of Tibet. Shen’s practice also encompasses public proposal, virtual reality, emoji (ideograms), online databases, tourist attractions and performance, often collaborating with individuals or parties whose specificity contribute to the making of the work. The fidelity of Shen’s work lies in the paradoxical nature of defining the common, which could remain so in order to continue existing

Counting Blessings documents the artist’s father, Shen Daohong, and his quest in searching the authentic images of the Tibetans. Deeply influenced by Russian realist painters like Ilya Repin, the father sets the goal of his career to achieverealism through innovative Chinese ink practice,  depict the Tibetan being  as one of his main subject matters. In the film, Shen conducted interviews around the father’s photo archive and set out performative tasks for the father and his friends to complete, in order to further examine solely the aesthetic framework of his career. The film also reveals Shen’s reality in maintaining a paralleled practice in oil painting alike her father’s, in order to be financially self-sufficient and to obtain the privilege of western art education.

Snow Country is an attempt to look at the representation of trauma through cinematic space, more specifically, the trauma of women’s bodies being violated, both as individuals, and as the victims of Second World War. Comfort women are the term given to the women who were involved in the systematic structure of sexual slavery created by the Japanese military. The film was shot in Norway and Sweden, resonating with Yasunari Kawabata’s novel with the same title.