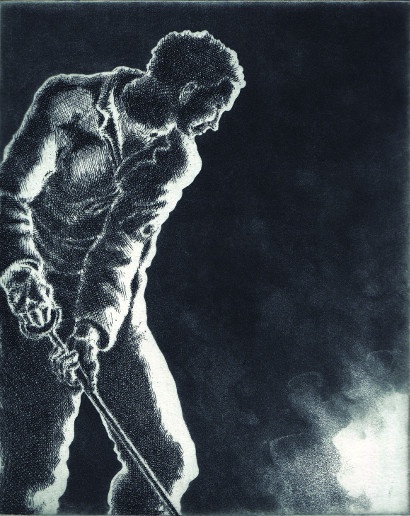 My prints are inspired by industrial work. I have gained access to draw within some amazing places that have taken me behind the closed doors of industry, including a tube train maintenance depot, sewage pumping stations, construction sites, the Bankside Power Station, the National Grid and an extensive period spent at a bell foundry. The skilled workers that I draw are relatively invisible, in that people outside of industry generally do not see what occurs. I have found it to be a constant source of inspiration. I have hundreds of drawings, made directly at these locations.

I am interested in the actions of the skilled manual workers, who use their bodies in wholly different ways to that of any domestic situation. I often attempt to create frozen moments that suggest a tension and ambiguity. Sometimes I create a fusion between my images of the worker figures, with influences drawn from paintings in museum collections. This offers the images a subtle hint of classicism. Spending time with historical art often furnishes me with ideas. My Portrait of a Bell Founder series I-IV were inspired by Baldovinetti’s Portrait of a Lady in the National Gallery, London. This 15th century  profile image sparked off a genre of profile portraiture, mainly of women. My own etchings and aquatints echoe these works , portraying four bell founders with the intention of celebrating these artisans of Whitechapel.

The etchings entitled Work I-VI are also developed from the many drawings made at the bell foundry and construction sites. For these I studied a printmaking genre loosely termed ‘unfinished prints’, which hugely influenced the manner in which I realised this work. Van Dyck, Rembrandt, Strang and many others, produced prints in which areas are heavily worked while other parts are a mere suggestion.

Drawings form the basis of all my prints. I mainly work with the process of etching, and occasionally with woodcut. Many of the places I draw, such as foundries  are quite dark and often there is strong contrast of light and dark. The rich tonal range that aquatint offers can evoke mood like no other printmaking process.