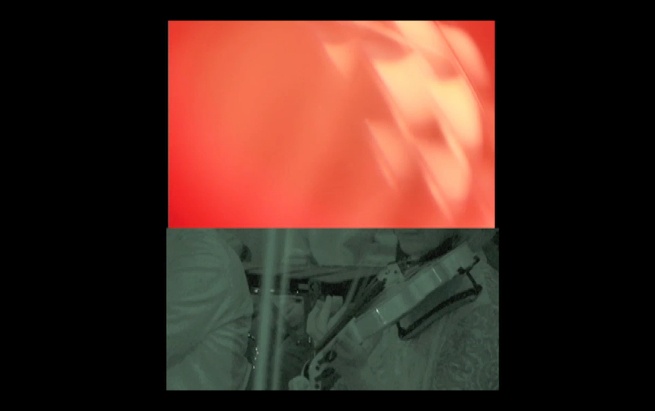 Jesc Bunyard’s work explores interactions between the spectator, environments, and perceptual responses to stimuli such as colour and music. This practice mainly consists of installations, videos and performances, and C-Type Photograms. Although the photograms can be displayed on their own, they also form the basis of her other works. The spectator is key within her work and she often places them within an immersive or perceptually challenging environment.

More recently within her practice, Bunyard has been exploring cinema by developing a series of short videos, which she foresees as transforming into an installation or site-specific work.

The piece selected for this year’s Bloomberg New Contemporaries is a video documentation from a performance ‘Photo Piece’, which was realized in December 2012. The performers were members of The Angel Orchestra, directed by Peter Fender, who improvised using Jesc Bunyard’s photograms as visual scores. The score was projected onto a large screen so that both performers and audience could see. The score was completely improvised by the musicians, although Jesc Bunyard did meet regularly with the performers to discuss their feelings and reactions to her work and to improvise to other scores.  ‘Photo Piece’ was the continuation of a series of explorations and performances involving musicians and artists responding to visual scores.

‘Photo Piece’ took place before the interval of The Angel Orchestra’s Winter Concert, there was no description of the performance prior to the event so the audience, who had come to see a classical concert, did not know what to expect. Jesc Bunyard views the performance not only as a wider continuation of her practice but also as an interruption to a traditional classical concert. The concept of using her work as an intervention, staging of an event or creation of environment is something that has become increasingly interesting to Jesc Bunyard.

The performance also was the initiation for another concept for Bunyard. Photograms are the result of an analogue process, shining light on photo-sensitive paper, which have then being digitally scanned to become a projected score. This analogue and digital transformation was also explored in Bunyard’s degree show piece in which photograms were back projected onto fabric with an accompanying soundtrack. The result was an immersive installation.