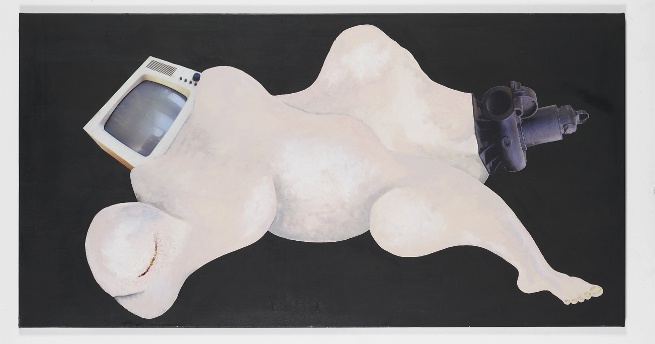 My practice focuses on the body, and involves the creation of hybrid figures; the human body reinterpreted and distorted, with collaged elements replacing body parts. The work seeks to be both a reflection of contemporary consumer culture, with its slavish devotion to product and possession, and a personal statement on intimate forces within which distort and transform the individual. Using found images of industrial machinery and consumer goods, I seek to create 21st century Frankenstein monsters, melding inkjet prints of digital images to oil paint rendered as diseased flesh on non-standard grounds, for example distressed cardboard and recycled canvases. The choice of ground acts as a statement on the temporary, throwaway nature of modern urban culture.

I aim to query the relationship between the human body   that fleshy corporeal mass from which we are all formed -  our economic activity as consumers, and constructed identities. To what extent do we attempt to project an image of ourselves through iconic purchases and possessions, and is this a valid strategy anyway, or just a route to an insincere and vacuous existence? Similarly, how much does the shape of our body define how we are viewed, and consequently, our acceptance within wider society? These questions raise important issues of body politics, particularly that we recognize and oppose corporeal discrimination, whereby only whoever’s  body fits a template of perfection, find adulation and advantage in society.

In our world of cosmetic surgery, body modification, and virtual identities, my work queries the abject. Mapping zones of transition between ‘Self’ and ‘Other’, the work looks for a locus of amalgamation, where the object becomes the individual & vice-versa. With more and more of our lives lived online, together with the growing popularity of aesthetic surgery, the boundary between the corporeal and the world around her are becoming increasingly blurred. How often do we hear, ‘I couldn’t live without my iPhone’, or learn of assumed identities on the web? Does our technology grant us an extension of our presence and personality, or rather does it increasingly hollow out the individual, as if by our incessant urge to possess and consume, we turn inward and cannibalise ourselves. Could it not be that our laptops and mobiles are the beads and mirrors of contemporary society: eye-catching trinkets, which in order to ownin just the same way as other cultures did for beads and mirrors in a previous age-  we part with  much more than their actual value, and may unwittingly sell ourselves into bondage to own.

In making these pieces, I look both outward at wider society and inwards to examine more intimate forces affecting the body, altering how we feel about ourselves. Issues like depression, isolation, obesity and addiction are important threads in my work, as they often cross the boundary between self and object, thus resting upon the abject. I attempt to bring humour into all of my work. Finding fleeting, ephemeral, irreverent laughter, and allowing it to flow into my work is a hard act to do, and requires a splash of gallows humour. The television is hijacked. All channels are locked. The only thing to do is to laugh, and enjoy a selection of two-dimensional projections of visceral deconstruction and extreme abjection.