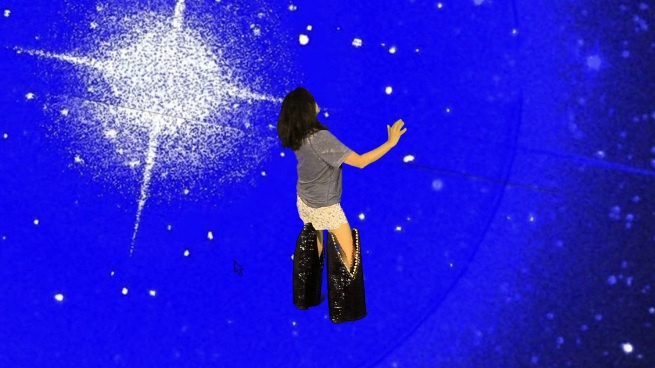 The exploration of play as a social behavior, how it can be linked to aspects of culture - ritual, performance, and contemporary art - is a main concern in Victoria Grenier’s work. Moreover, play creates an ambiguity of meaning; serious and not serious, reality and outside reality; it exists in many forms and is extremely difficult to define or explain.

Indeed the dynamics of play affect objects in peculiar ways. In the artist’s work, the object might be transformed through its role in a game or enactment of a narrative; it might become symbolic, and therefore dual, like play itself. Its status shifts only to shift back the moment play is over. Occasionally, the narrative and the object become intertwined in such a way that the object retains some of play’s potency and is able to stand on its own.

When watching a film (and when playing), the disbelief of the audience (and of the players) is temporarily suspended to allow a quasi-total immersion; awareness of reality is kept at a distance, at the periphery of the mind, but never lost. Victoria Grenier’s practice explores this duality. When the object is taken out of a specific context – from its virtual presence in a video into the exhibition space - its materiality makes the fiction more tangible and reveals its illusion simultaneously.

In Victoria Grenier’s work, fiction and reality merge in dreamlike, often humorous, narratives. Space exploration and sci-fi; natural history and the Muppets; masquerade balls and video games; all mix in her work like nuts in bowl, setting the aesthetics and subject matter for her objects, costumes and videos.

Banana Split is a boogie in Google Sky. An evening stroll in a flat deep space. Slippers will eat her one day, but it’s all right. That other fellow though, alone in the forest, or is it the green house in Kew? Just like any other animal, he’s not going to sleep well; he doesn’t need Slippers to remind him.