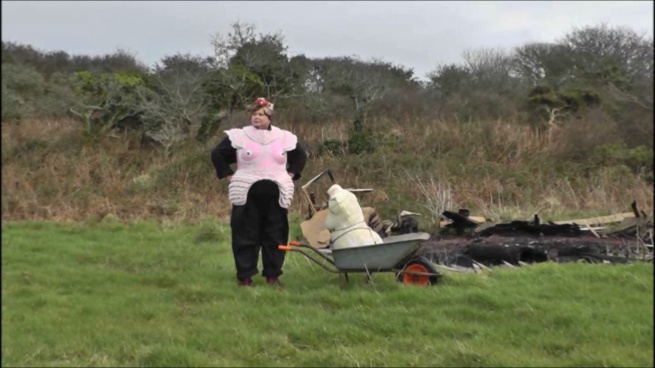 Watch The Splendid Life of Hildegard Ramsbottom by Stacey Guthrie

Watch Disarmed and Ever So Slightly Dangerous by Stacey Guthrie

I am passionate about art as a type of shorthand; communicating experiences in distilled form, removing the need for words but not excluding or denying them. I feel that words can limit and contain an experience, whereas art is fluid and open, allowing the viewer to come to their own conclusions and own their responses.

I delight in  humour and its ability to cross boundaries and condense a vast array of themeswhilst conversely opening up, and diffusing sometimes difficult subject matter. Humour can do this in such a way that people do not feel threatened.

There is no overtly feminist intention to my work but as I am dealing with my own story as a woman, it becomes unavoidably and inextricably tangled with the stories of other women. Despite the surreal nature of the videos, people seem to find a common bond between their own experiences and what I am portraying on screen and this gives me a great deal of satisfaction.

I am a woman who does not meet societal expectations of ‘femininity’ and how women ‘should’ behave. I am transgressively large and bold and I am compelled to create uncanny, carnivalesque characters that verge on the grotesque; characters that behave in ways that temporarily suspend the social order and invite us to fully share their madness; exploring and embracing the power of hysteria.

I am a compulsive maker and I enjoy watching the things I make come to life in the videos in which I use them.. I feel that using them in this way creates a narrative which the audience can sense. The audience also applies their own meaning to the work, and these layers of meaning become part of the works fabric until the original meaning may, in fact, become the least important.

Overall, the videos are my attempt to create a liminal space for these characters to reside in that is both real and unreal, creating a tension, which makes for a sense of peril and fecundity; an ultimately creative space where belief can be suspended and magic can happen.

In The Splendid Life of Hildergard Ramsbottom I was exploring what can happen to women who subsume their own needs into those of their partners and children so much that it can lead to a total loss of any sense of self,ultimately pushing them out of touch with reality.

In Disarmed And Ever So Slightly Dangerous I was investigating the concept of personal armour, both physical and emotional. I became interested in the forms it takes and what happens when we take it off.