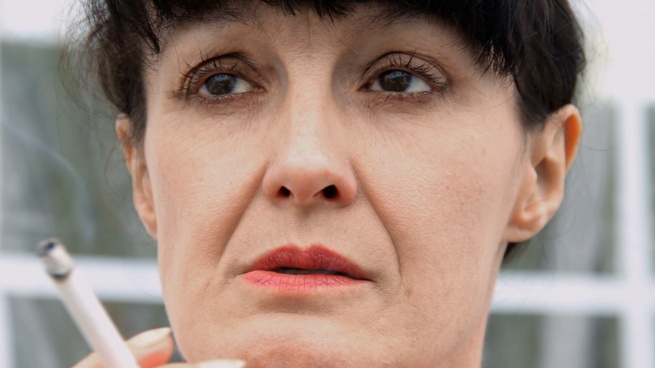 Cannibals (2013) was developed out of research around the online community - ‘Women Empowering Women’, the all female support group adopted the ethos of self-change; therapeutic discourses are transformed in this context into a vehicle for a non-sustainable business model. In this instance notions of female empowerment operate as an authoritative branding tool, WEW emerges as a traditional pyramid scheme; a microcosm of a capitalist system, mirroring an image of unsustainable growth. Before they eat, the women participate in ‘emotional circuit training’; the body is ‘tenderized’ in preparation for self-consumption. The fictional process deteriorates when one of the participants observes this pseudo-therapeutic process to be eating away at itself.

Well Being (2013) takes the form of a workshop in ‘emotion entrepreneurship’, where emotions are circulated as the principle commodity. The film is developed out of a body of on-going research into pyramid schemes and home-spun therapies. The fictional group are learning to lead, in order that they might disseminate their own working method amongst a network of friends, colleagues and neighbours. The leader is creating a sales force who in turn trade on their personal charisma and contacts to move the therapeutic product.

Buried Alive (2013) operates as a sequel to Well Being (2013), a participant from the leadership workshop has brought together her own group of women, instituting her own methodology and leading in her own domain. In a rented beach house the group strategise and enact ways to banish the “unnecessary burden of guilt”.