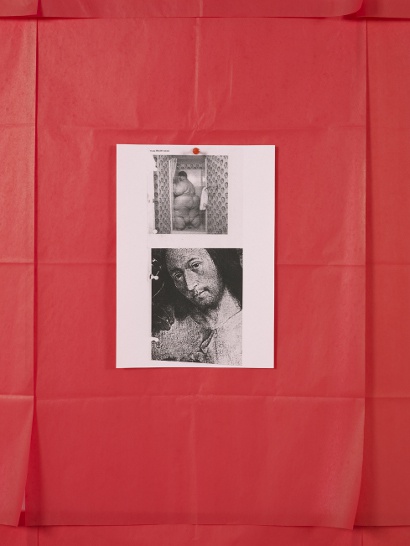 My interest in collage developed out of its literary applications, for example William S. Burroughs ‘cut-up technique', and its subsequent absorption into visual culture during the punk movement, for example, the punk fanzine ‘Sniffin’ Glue’. Their hand–cut, photocopied approach, jigsaws images together to create unexpected continuities and jarring discontinuities which connects with my aim of working in an improvised way with new and appropriated imagery. My use of appropriation is often measured, but retains an element of the surprise of the original unexpected collusion.

I use cut and paste techniques, drawing on the effect of mood-boards to try and place decontextualized imagery in the orbit of another images meanings. This complicates their potential, developing gradations of tone and space, and creating a kind of cocktail effect of motifs and new outcomes. I vary the approach to exhibiting my work, pasting singular or multiple images in public spaces, or using images both as part of an installation or individually within a gallery. Paper works are often pasted directly onto the gallery wall in single editions or as multiples, which have filled the wall in a wallpaper effect. I also display the works outdoors, pasted on walls, telephone booths or billboards. The printed images are also used in paintings, where I engage with qualities of minimalism and abstraction to further develop the movement in the collages.

'Jesus Fat' is exhibited as a single image or as part of an installation of tissue paper of variable dimensions. A detail of the Hieronymous Bosch painting 'Christ Mocked (The Crowning with Thorns)' combines with an image of a morbidly obese woman. The complex, serene expression in his face is mined for it’s psychological qualities to establish a reflection on religions instigation of ideals that lead to persecution, whilst simultaneously cultivating a vocabulary for empathy and acceptance. The concept of an all-seeing morality is described as both sympathetic and voyeuristic.