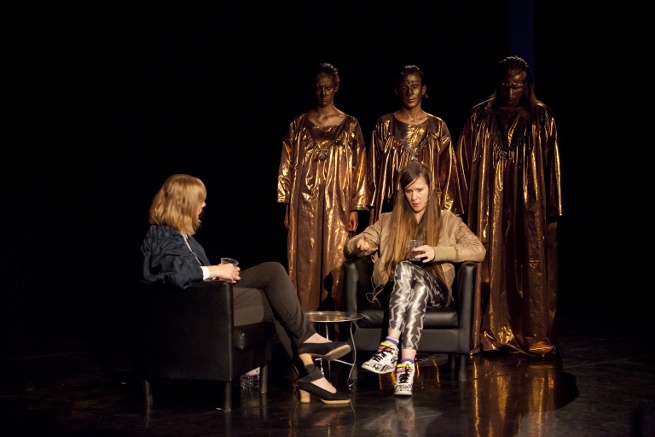 Emely Neu is a performer whose work evolves around interviewing as artistic practice.

She refers to it as ‚‘Performative Interviewing‘. With a background in music journalism, the guests for her performative interviews are often figures embedded into popular culture. Neu’s work is set out to deconstruct the common form of the journalistic interview and to expose and display underlying power struggles. The recontextualisation of the interview also confuses and redistributes the hierarchy between fiction and reality.

Neu  not only focuses on staging live performative interviews but also explores how the different forms of journalism (broadcast, print etc.) can be used to create another kind of performativity

With Choir merges the TV talk show with the world of theatre and performance.

A Brecht-inspired, semi-fictional choir transforms the live interview into a triangular conversation. Two modes of improvisation collide; the performance of the choir and the interview itself, which is neither pre-scripted nor rehearsed. The choir’s actions are based on the inclusion of five demands: a gesture, sharing of a secret, a repetition, a question and an interruption. How and when these are integrated is only known to the choir, as neither interviewer nor interviewee is informed

The choir visually, sonically, directly and indirectly blurs and restructures the hierarchy between reality and fiction

Inspired by Brecht’s dramatic theory, the choir has a double function; embedded into its own world, it acts as a performing character in its own right, whilst it also embodies and visualises the conflict between the interviewee and interviewer

What happens in the interview itself can also be seen as a reversed ‘Verfremdungseffekt’ – the generated fictional reality causes an interruption in the identification process, the audience therefore becomes actively involved in the production of information. When the choir sonically overpowers the interview, it also acts as a live ‘editing tool’, leaving it up to the audience to make sense of what has been said.

With Choir-A Performative Interview with No Bra is an early look into this ongoing project which is currently being developed further.