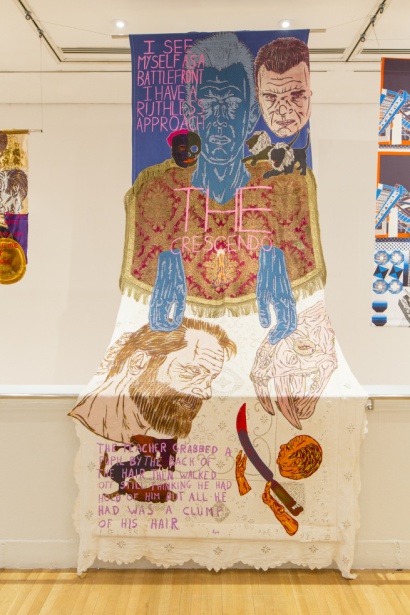 Reflecting on myself as an artist it has been an endeavour to gain a meaningful understanding of the formative moments that have shaped my life. I am resolute in challenging my emotions with depth and contemplation in the pursuit of obtaining the genuine truths that define me. Throughout my artistic practice is a commitment to creating work that is engaging and confrontational with the intention of possessing a commanding presence.

The artworks selected for BNC 2014 were made in response to my grandfather almost dying, I wanted to capture this point in his life and have him face his own sudden fragility. I was inspired by the story of Constantine The Great who had a 40ft statue in Rome, which was destroyed when the city was pillaged. The only remnant of this once colossal figure is his head. This sense of a noble man brought to his knees is what I identified with and how I wanted to portray my grandfather, it is both a fragmentation of his self and his memories.

My primary medium is textiles as it has enabled me to communicate my thoughts with a conviction and complexity that I have yet to find in other art forms. I choose to work in fabric as it is an emotive material that has the power to encapsulate periods and cultures, which I then use to imprint my own connotations. Collaging surfaces and techniques has led me to compose artworks on an elaborate scale that portray the events and actions consequential to me.

A significant aspect of my creative process is performing with theatre actors who act as a sounding board to evoke unexpected perceptions and reactions. I collaborate with a number of practitioners who have the technical expertise to assist me in bringing together the visual components to realise my art. This exchange of dialogue has encouraged me to explore new disciplines and delve deeper into the core principles that define me as an artist.