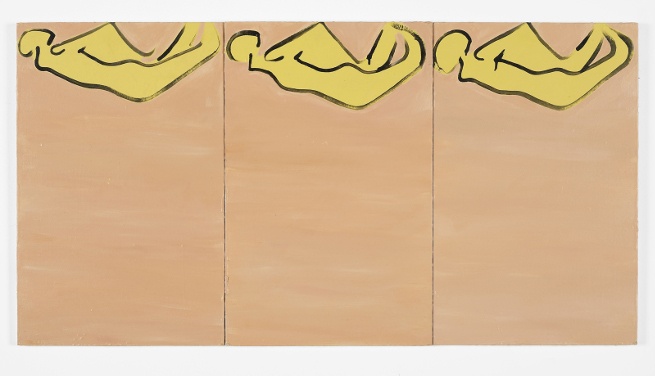 Composers enrich their notations, giving the musician an idea of the attitude in which the music should be played – my work attempts to do the same, setting a visual temperature to a figure which is perhaps bonded or balletic.

Consider the relationship between the body and its image, what happens to the body when it is reduced to a line or when the singular becomes multiple or mass?  Through painting, drawing and sculpture I allude toward the tendency, perhaps even necessity, to understand everything by their simulacra, shortcut or notation.

The body can remain tangible despite the economy of representational marks. A quivering point in the production of a painting, where just enough information has been given and a line holds its weight, can make its presence felt. Curvilinear repetition sits on a milky surface, oil separates from pigment and stains, edges spill out and are corporeally butted against one another.

A central concern is the shift between the singular autonomous painting or body and its counterpoint in repetition, moreover if it is strengthened or demoted by this multiplication.

We are stranded in repetition, body and mind echoes forward and backward away from the central me, but every murmur supposes autonomy and observes their own copies swinging in and out.

The grid-like drawingsslowly distend the link between the figure and schematic mark, becoming one optically agitating surfacewhich counteracts and upsets the potentially decorative, feminine first glance.