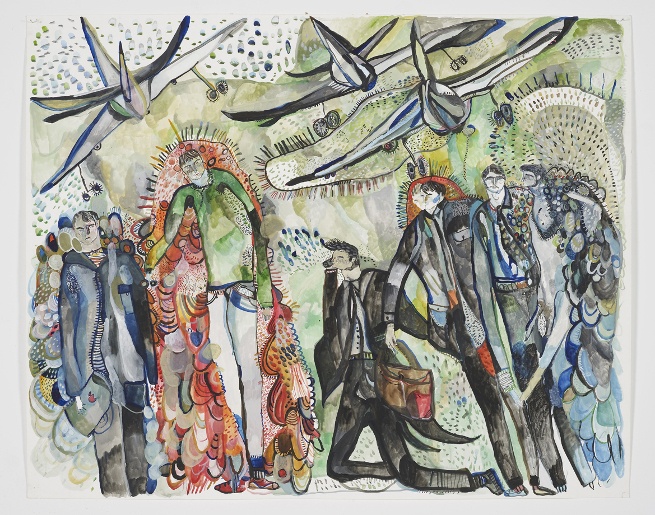 “Things are not always as far away as you think they are: they can be close, just drifting alongside. This is the imaginative world, and this strange place does exist.”

A tutor once told me this, and these words have become the driving force behind my work – to bring the imaginative world closer. My work is also driven by loss as over ten years ago I lost a family member. My brother did not die, but his disappearance felt that way. I was eleven when I watched him look at me for the last time before walking away. I have not seen him again and so I began drawing so as not to forget him.  My older brother was

Who fell instantaneously into an autobiographical realm where I capture fragments of important journeys. Here the times and places which I wish to not forget are kept safe; and so the characters in my stories are frozen in time; they are stopped from becoming forgotten or fading away like ghosts. This is of course helped tremendously by the ruler of my dominion, a clean shaven god with a bare chest; he is embellished with Neo- Naturist type nipple decoration and has his right ear pierced twice with two small gold hoop earrings. His side-kick disciples are The Darlings and they are considered to be the most exquisite hybrids of the 21st century because of their bold accessorised angel wings and boy band good looks. These features are beautiful and call for mortal audiences to exclaim ‘god youso handsome!’ at their every step. My god and his Darlings grant immortality, for in their kingdom nobody ever dies.

When I was younger I was told that if you repeated something sixty times over then you would never forget it. This phrase mirrors a childhood memory I have of watching my mother at work reupholstering tapestries and oriental rugs. The constant, continuous stitching and needlework made me aware that a world could be created through intricate detail, line and pattern. Memorializing events and particular memories that I have communicates this.

Ornamentation and intricate detail allowed me to build shrines and therefore my characters are transformed into religious icons, these characters in particular are evident in the work that has been selected for British New Contemporaries 2014. My imaginative world which is developed from part memory and part observation, details the important journeys that I have taken, from the childhood I did not want to leave, into the awkward beguiling adulthood which ultimately steals us all.

My paintings have allowed me to enshrine my past and immortalize my history; a history that is at once personal, but one that identifies with us all.