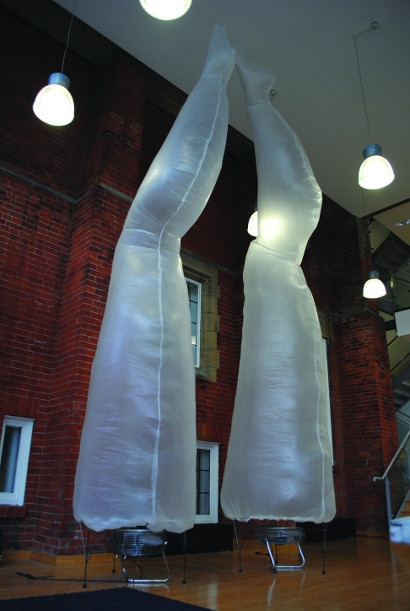 Katie Hayward's curiosity into individual desires manifests itself through the use of ceramics, drawings and inflatables. Whilst exploring Ghent, Belgium during an exchange in 2012, she began to notice she was constantly looking up; this realisation formed the basis for a body of work that attempts to reach heights at an exaggerated and unrealistic level. Her Thoughts series are initial ideas usually consisting of collage, pencil drawing and watercolour. These sketches are a diary of growth prototypes, some of which are fabricated and others remaining fictional. They are a curious set of drawings inventing fantastical means to reach and accomplish an illusion of becoming greater than one’s self. Her current work has been exploring inflatable devices that reflect this illusion of great height. Her work Pillars are inflatable limbs that are made to measure within a given space. By sewing together very fine plastic, the fragile giant is then inflated using a conventional fan. The work is abnormally lightweight for its size, given life by a breath of air it superficially reaches beyond its limits, until it is deflated and returns to nothing. Using readily available materials, Katie's work aims to reflect the everyday fragile nature of dreams.