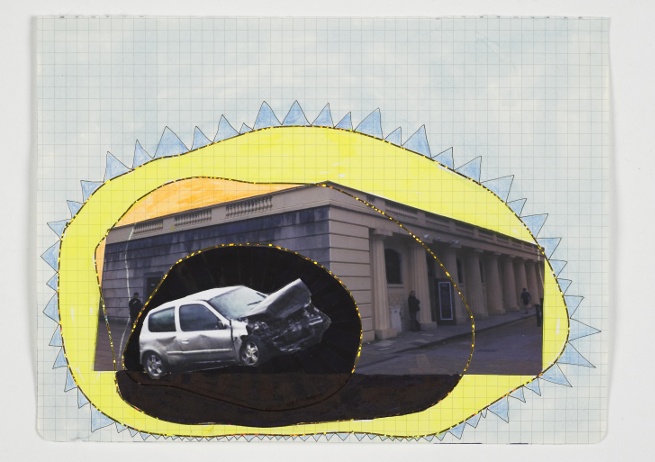 My practice is led by my studio-based work, which explores my ideas, imagination and experience often through drawn or written proposals, with a large emphasis on the possibility/hope of what could be realised. My work either remains in this fantastical unrealized state or extends into reality and the everyday world through sculptural intervention/installation/performance. Largely set within an everyday environment or responding directly to a chosen architectural space or landscape, these works enforce my own experiences and imagination onto the viewer in an imposing form. Often created on a monumental scale, exaggerating form and presence. My intention is to create a moment of distraction, away from what already exists, a trigger device - a shift through encounter that can somehow create awareness or even seem to prolong the present moment in time.  I am also interested in investigating how waiting, looking and experiencing might imprint an encounter on the viewer’s memory.

Perhaps by chance, through their site-specificity, my sculptural installations/interventions obstruct a moment of my audience’s time, but can create an impact, briefly disturbing the interrelation between fantasy and reality. I am interested in high up spaces, the idea of looking up. Materials that glimmer, distract or may only exist as a flash in someone’s peripheral vision captivate me. My practice is preoccupied with rupture, and by this I mean an interruption of sorts, a moment of severe distraction - a primary interception or intervention – a cut, break, crack that is received physically, emotionally or mentally through a given moment in time, an unexpected and unknown encounter. I am continuing to explore this area in the way of site-specific installation, film, performative sculpture and photography. This is the area I am pursuing through the works I have proposed to the ICA.  STALKING THE BUILDING & POSSIBILITIES FOR THE ICA a series of drawings/proposals that have the potential to extend into actual works sited on the ICA building itself.