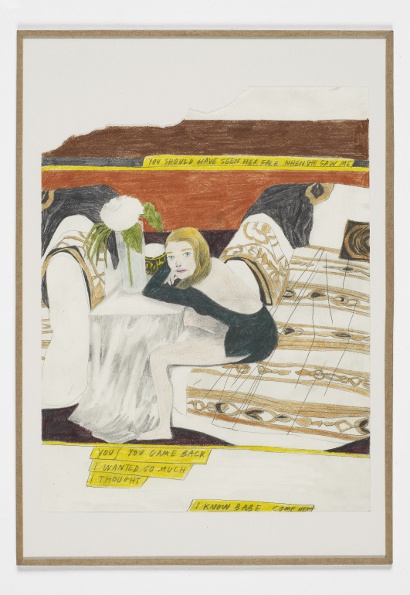 My process finds its roots in my daily practice of drawing and writing. Those notes I am taking help me gather and process information, whether it being a pattern I liked to a conversation I overheard, or to an idea I had for a comics scenario, etc. They inform the rest of my creative process, fundamentally but also formally. To use an architectural metaphor, I really do consider them to be the skeletal structure of what I am building.

Theme wise, my work is a comment on human relationships and on how we deal with essential and existentialist subjects such as love and death in our everyday life. I essentially tend to depict women but the point of view I am drawing from isn’t usually clearly gendered, my ‘voice’ can be in turn masculine and in turn feminine. I am by no means trying to give a moral opinion of mine through my pieces but rather wanting to share my observations about human beings and their social interactions.

Formally, my pieces tend to take very different shapes, from various types of editions (from comics to artist books) to different sorts of installations (from series of drawing on plaster installed on the floor to oil paintings onto dustsheets). I would like to stress that although the main part of my practice revolves around the development of experimental figurative ways of narration, some of my pieces can be sometimes, within that frame, purely abstract – like for instance a series of lithographic monoprints on japanese paper I made about caves or a series of textile patterns and clothing pieces I designed.

My creative process tends to be very organic and intuitive; it is very rare for me to know precisely where I am heading at the beginning of a research period. The idea of the form slowly merges and shapes as I go along. I usually start with focusing on one element that becomes obsessive – it can be as simple as a recurrent pattern or a sentence or an image – to which I associate other images or texts. And it is this collage that allows a narration of some sort to develop. I believe it is a similar process involved in the action of collecting, the only difference in my work being that instead of selecting already existing objects, I produce all of them. In this regard, I like comparing my production to some kind of archaeological investigation, when you keep digging the ground unsure of what you’re about to find, yet with a slight idea of what might be buried there. The more and more clues of the final piece emerge as the work progresses. This principle is very close to poetry making and reminds me of the ‘Correspondance’ system Baudelaire proposes in which something can be seen through a new light when associated to something unexpected.

As various as the nature of my work, my influences range from painters, such as David Hockney, Tal R or Philip Guston, to comics drawers, such as Blutch, Glenn Baxter, Daniel Clowes or Chas Addams, to writers, such as Marguerite Duras or Moravia, to cinéastes, such as Antonioni or Buñuel, to installation artists, such as Tauba Auerbach or Thomas Hirschorn, to fashion designers, such as Dolce & Gabbana or Phoebe Philo for Céline

Be young, be wild, be desperate is an installation piece composed of 60 drawings (pencil colours on paper).  Each one of them can be looked at separately, as an independent entity, but, as an ensemble, they start constructing a broken fiction, depicting the story of a love, from its beginning – when life seems so bright, the sun shines and yet, you, still doubting such a happiness can be true – to its end – when the breaking up is nothing but a bloody mess. They appear to be the remaining fragments of a bigger story (stories) that we can’t envision completely. Those snatches are for me a very close depiction of how I feel we can grasp reality, never fully, mostly through the memories we keep of already past events that relentlessly escape and keep transforming. The experimental narrative form of this sequence wants to mirror this feeling of unsettlement and uncertainty. This series specifically has a real and obvious taste of comics, notably because there is, although quite loose and experimental, a narrative order to it and because of the key relationship between the texts and the drawings.