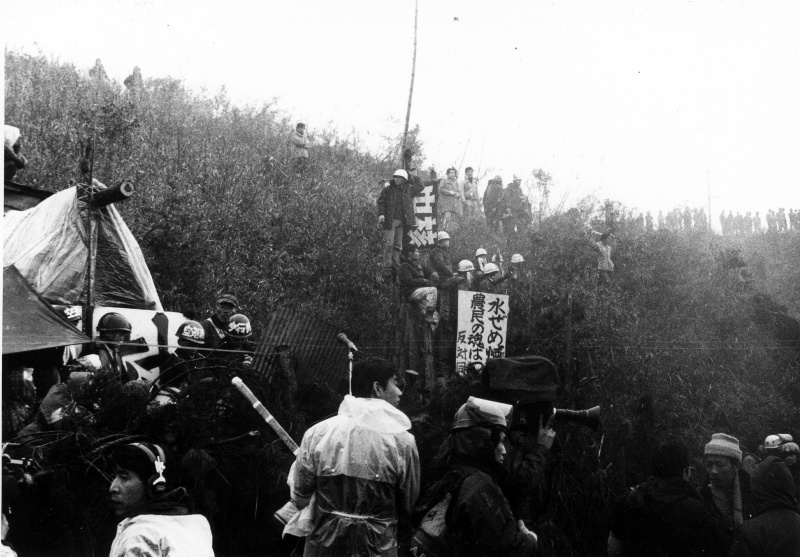 Ogawa Shinsuke and Ogawa Pro: Collective filmmaking and the culture of dissidence

This retrospective season highlights the essential documentaries of Ogawa Shinsuke (1936-1992) and the filmmaking collective Ogawa Pro, founded in the late 1960s under his direction. These works were a formidable force in postwar independent Japanese cinema, and their influence is still felt today in Japanese and other Asian documentary filmmaking. Documenting the student struggles and the Sanrizuka protests from the late 1960s until the mid-1970s, these films recorded major political and social upheavals in Japan with remarkable dedication and commitment. The group strived for collective decision-making and achieved an unusual level of connection and empathy with the people they filmed. Proudly independent, the aim of Ogawa Pro was not only to find new ways to fund and produce their work, but also to distribute and exhibit their films to new audiences in alternative venues. Their practice—which lasted over thirty years—raises timely questions about radical documentary practice, authorship and the nature of independent, collective and political filmmaking.

The ﬁlms of Ogawa Pro can be divided into three periods. The ﬁrst independent and collective ﬁlms recorded the organisation and violence of the student protest movement in Japan during the late 1960s. In the following decade, Ogawa Shinsuke and the members of his newly formed ﬁlmmaking collective moved to the rural area of Sanrizuka, near Tokyo, where they directed a powerful series of seven ﬁlms chronicling the long-standing struggle and resistance by local farmers and their allies, in the face of brutal suppression by the police, against their eviction designed to make way for the construction of the new Narita International Airport. Having honed their methods by developing a deep empathy with the villagers and their stories, the collective then moved to the village of Magino, Yamagata Prefecture, where over the next decades they lived communally, painstakingly crafting extraordinary ﬁlms about farming, village life and time.

This programme at the ICA offers a rare opportunity to discover one of the most important bodies of work in documentary cinema, with a selection of films covering thirty years of filmmaking by Ogawa Pro. It also includes two excellent documentaries on the collective: Filmmaking and the Way to the Village (1973) by Fukuda Katsuhiko, a member of the collective, and Devotion: A film about Ogawa Productions, directed in 2000 by queer feminist filmmaker Barbara Hammer, about the complex dynamics within the group, including interviews with members of the collective and with filmmakers such as Oshima Nagisa, Robert Kramer and Hara Kazuo.

The programme also includes the European premiere of the film The Wages of Resistance - The Narita Stories (2014) directed by the veteran Otsu Koshiro (who shot Summer in Sanrizuka) and Daishima Haruhiko who revisit the fields of Sanrizuka to meet the people left behind - and still resisting after all these years.

Born in Tokyo in 1936, Ogawa Shinsuke served as assistant director at Iwanami Productions from 1960, and participated in the Ao no Kai [Blue Group] film study unit with Higashi Yoichi, Iwasa Hisaya, Kuroki Kazuo, and Tsuchimoto Noriaki. Ogawa went independent in 1964 and made his first films Sea of Youth (1966) and A Report from Haneda (1967). His films were supported at workplaces and universities throughout Japan in the midst of the Zenkyoto student movement. He founded Ogawa Productions in 1968 and went to live in the farming village of Sanrizuka while producing the seven films of the Sanrizuka series, which depicted the movement in opposition to the construction of Narita International Airport. Continuing to make films from the viewpoint of farmers, in 1974 Ogawa moved to Magino in Yamagata Prefecture’s Kaminoyama City, where he filmed "Nippon" - Furuyashiki Village (1982) and The Magino Village Story (1986) while growing rice and observing life in farming villages. His dedicated work as an organizing member of the first YIDFF in 1989 was instrumental to the festival’s success. He passed away on February 7, 1992.

Programme delivered in partnership with The Japan Foundation. With thanks to the Athénée Français Cultural Center, Tokyo, the Yamagata International Documentary Film Festival and the Documentary Dream Center. Special thanks to Ricardo Matos Cabo for collaborating with the ICA on this project.