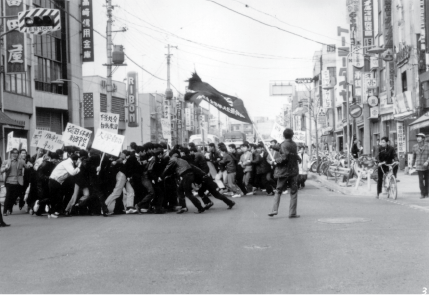 Ogawa Shinsuke and Ogawa Pro: Forest of Oppression — A Record of the Struggle at Takasaki City University of Economics

A galvanising documentary about the organised resistance of a group of students barricaded at the Takasaki City University of Economics.

The university student struggles at the end of the 1960s in Japan were the culmination of over a decade of protests, social dissent and political unrest. All this gave energy to the student movement, which displayed original and sustained forms of organisation and resistance against the government and which would spread to universities all over the country. Together with the filmmakers of the recently formed collective Jieiso, Ogawa Shinsuke joined a group of students barricading themselves inside the Takasaki City University of Economics. Shot over the course of a year, this film documents the nature of the political discussion and organisation as well as the fierce debates going on among the students and their violent struggles with the authorities.

Forest of Oppression was a call to arms, an electrifying film that turned out to be immensely popular among the students all over the country.

Forest of Oppression - A Record of the Struggle at Takasaki City University of Economics (Assatsu no mori – Takasaki Keizai Daigaku toso no kiroku), produced by Jieiso, Japan 1967, 16mm (transferred to digital), 105 mins, Japanese with English subtitles.