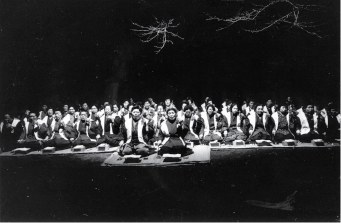 Ogawa Shinsuke and Ogawa Pro: The Sundial Carved with a Thousand Years of Notches — The Magino Village Story

A monumental and complex ﬁlm on time and history, painstakingly crafted over more than ten years, and the culmination of Ogawa Shinsuke’s practice of documentary ﬁlmmaking.

In 1974 the Ogawa Pro collective settled in the small hamlet of Magino, becoming involved in the daily life of the village, living communally and learning everything they could about the production of rice. During the following decade they devoted themselves almost exclusively to this film. The Magino Village Story brings together all the ideas and themes developed in the previous works of the collective – farming, the time of the village, the deep relations between the people and the land, the importance of recording oral history, the long culture of dissidence of the farmers, and their resistance against authority.

The past and present time of this place is layered through the storytelling of the people, the rendering of village time, the temporality of rice harvests, and the seasons. An archaeological excavation opens up a meditation on time. The film is cosmic, expanding as it follows the rhythm of the slow growth of crops and the passing of the years. The people tell their stories, recite ancient myths, and reenact fictional sequences (featuring actors, such as the founder of Butoh, Hijikata Tatsumi). In order to screen this ambitious film, Ogawa Shinsuke imagined and constructed a theatre that he named The Theatre of a Thousand Years.