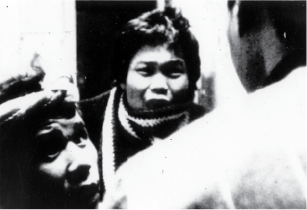 Ogawa Shinsuke and Ogawa Pro: Dokkoi! Songs from the Bottom

One of the most moving ﬁlms made by Ogawa Productions, a portrait of the people living in the slums of Kotobuchi in the port city of Yokohama. The ﬁlmmakers give voice to the silenced people who tell their stories and sing their songs.

After the waning of the protests in Sanrizuka, Ogawa Pro started questioning the future of the collective and looking for other subjects to ﬁlm. Following the method developed in the previous ﬁlms, the ﬁlmmakers moved to the slum of Kotobuchi in the port city of Yokohama, where more than 6000 people were struggling to get by without any means of survival, exposed to industrial accidents and diseases. The result is one of the most moving ﬁlms produced by the collective, a series of beautifully ﬁlmed portraits, voicing the silenced stories and songs of a group of people living in this community.