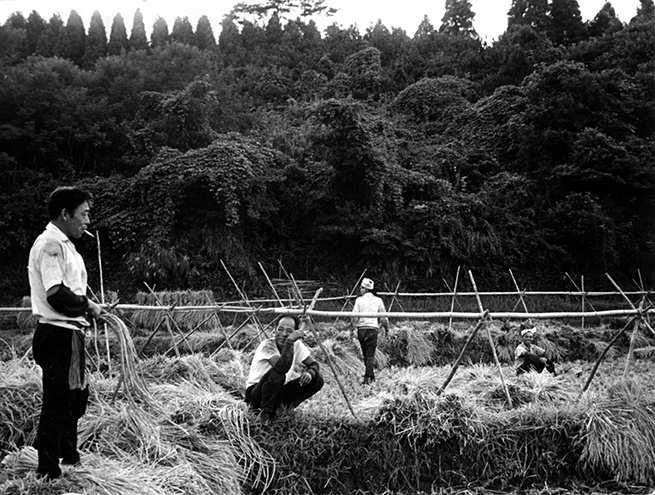 One of the great ﬁlms of Ogawa Productions, the culmination of a long cycle of ﬁlms on the conﬂicts at Sanrizuka, and a meditation on peasant life and the time of the village.

This ﬁlm was the turning point of independent documentary ﬁlmmaking in Japan. After years ﬁlming the long-standing struggles at Sanrizuka, the ﬁlmmakers became more and more immersed in the life of the people and the village. As the violence escalated, people were killed and thousands were imprisoned. The ﬁlmmakers turn their attention to the people of the village of Heta and their customs with deep sensitivity. The politics of the collective are displayed in the empathy they show towards the villagers, who tell us how the protests have affected their lives, their families and farming. The ﬁlming adapts to the slow ﬂow of time in village life and a series of very long takes contribute to the meditative tone of the ﬁlm.

This screening is preceded by a lecture from Professor Markus Nornes entitled Heta Village: Rending Village Time, discussing the historical arc of Ogawa Productions' filmmaking and how it arrived at this very special place.

Markus Nornes is Professor of Asian Cinema at the University of Michigan. For many years, he was a coordinator at the Yamagata International Film Festival. He is author and editor of many books on Japanese, Chinese and Korean cinema. His Forest of Pressure is a critical biography of Ogawa Shinsuke's collective. Fifteen years in the making, it is an approach to book writing mirroring the long-term filmmaking practices of Ogawa himself.