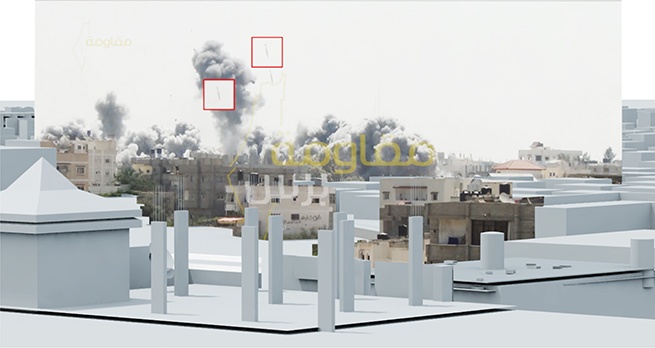 Counter Investigations: Forensic Architecture takes place in the Lower and Upper Gallery and the ICA Theatre, and can be entered with Day Membership

Counter Investigations is a survey exhibition of the work of Forensic Architecture, an independent research agency based at Goldsmiths, University of London.

'Forensic Architecture' is not only the name of the agency but a form of investigative practice that traverses architectural, journalistic, legal and political fields, and moves from theoretical examination to practical application.

In recent years Forensic Architecture has undertaken a series of investigations internationally into state crimes and human rights violations, spanning events within war zones and instances of politically and racially motivated violence and killing outside of military conflict. These investigations have led to the contestation of accounts of events given by state authorities, affecting legal and human rights processes, giving rise to citizen tribunals and truth commissions, military, parliamentary and UN inquiries.

The work of the agency has responded to the widespread increase in availability of digital recording equipment, satellite imaging and remote sensing technology, alongside platforms for data sharing. While such developments have contributed to the complexity of forms of conflict and control, they have also enabled new means of monitoring. Grounded in the use of architecture as an 'analytic device', Forensic Architecture's investigations employ spatial and material analysis, mapping and reconstruction, and extend outwards to overlay elements of witness testimony and the cumulative forms of visual documentation enabled by contemporary media.

Counter Investigations presents a selection of recent and new investigations by Forensic Architecture. These address cases including the racist murder of a man in Kassel, Germany by a member of a far-right group, and instances of deferred responsibility by state agencies that have contributed to the deaths of migrants at sea in the Mediterranean. As historically contextualised interrogations of contemporary social and political processes, these investigations put forward a form of 'counter-forensics'. They serve as sites for the pursuit of public accountability through scientific and aesthetic means, in opposition to the monopolisation of narratives around events by state agencies.

The individual investigations presented function as anchors for public events, workshops and discussions, with the exhibition as the physical infrastructure for the curriculum of a short course in forensic architecture.

* Video still showing two bombs in mid-air fractions of a second before impact in the Al Tannur neighbourhood in Rafah, Gaza on 1 August 2014. Knowing the distance between the photographer and the exact place where the bombs hit allowed Forensic Architecture to locate a scaled image plane within the 3D model of the neighbourhood and determine the shape, size, and make of the bombs.