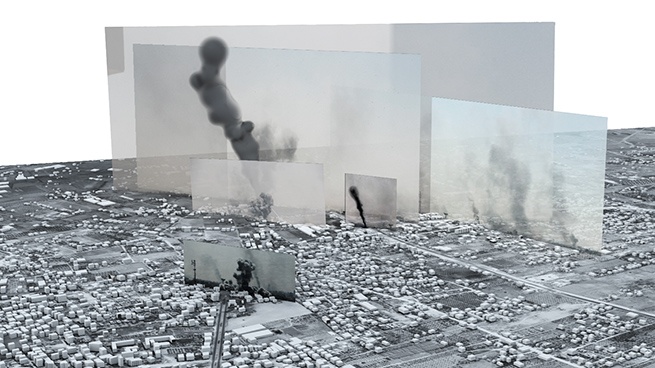 This seminar on the 'image-data complex' discusses the evolving politics and practice of images as data points. In our increasingly mediatised reality, where contemporary events produce a huge multiplicity of images and other data sources around them, the very act of viewing has gradually been transformed. To understand incidents means to be composing relations between images and navigating this composition – sometimes between a few scarce images; often between dozens if not hundreds coming from multiple sources, produced using different technologies and resolutions, and associated with different data-sets. Such a mode of composition, according to Forensic Architecture, is an architectural act, one necessitating an 'architectural image-data complex'. What new form of image and data practice does the proliferation of media evidence allow? And what is the role of the human investigator in an era of emerging artificial intelligence?

Members of Forensic Architecture introduce the concept of the image-data complex, in relation to the investigations including The Bombing of Rafah, The Enforced Disappearance of the 43 Ayotzinapa Students and Sea Watch vs. Libyan Coast Guard.

Following the seminar members of Forensic Architecture will lead a practice-based workshop on 'data and pattern analysis'.