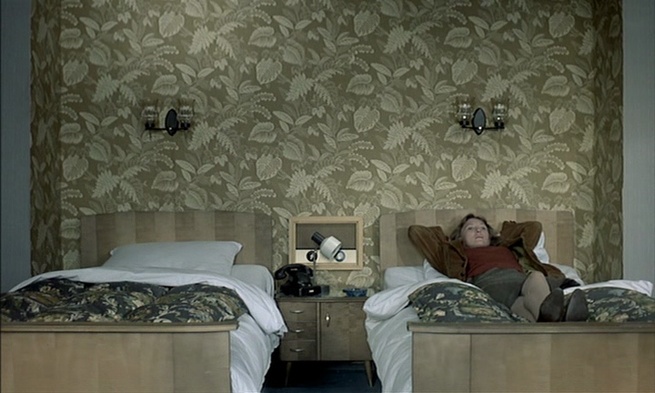 A Nos Amours continues a retrospective of the complete film works of Chantal Akerman with Les Rendez-vous d'Anna (1978), a polished, forlorn fable of isolation. With an introduction by Chris Petit.

Anna Silver is a filmmaker. Her mother and sick father live in Belgium. Her frequent travels mean that hotel rooms are home as much as anywhere. Visits to the parental home are fleeting affairs - confessional intimacies between mother and daughter must be taken wherever they can. Pick-ups are easy-come-easy-go affairs. Commitment is provisional. 'Anna, where are you?', a voice enquires. Anna may not know or much care.

The reflexive, seemingly autobiographical nature of all these components needs no underlining, and this hall-of-mirrors effect can be superficially disorientating. But a true bearing is sustained by the luminous, painterly miracle of wonderful image-making, and the sure sense of a great mind at work, exploring the alienating topographies of contemporary Europe.

Here is dislocation amid the faux-comforts of hotels, endless peregrinations according to inescapably rigorous train time tables, nomadism as a form of deferred existential crisis. And a growing, nagging suspicion that for Akerman, indeed for any sensitive being, the spectre of the Nazi’s final solution haunts the trains and soulless places of Europe.

A profound work of art that finds Akerman exploring a new Bressonian idiom, that plumbs the well's depth.

Chris Petit will introduce this screening of Les Rendez-vous d'Anna. Chris Petit is a filmmaker whose concern with journeys, flux and the transitory has been so marked from his debut feature Radio On to his recent London Orbital.

A Nos Amours would like to thank the ICA, Picturehouse, Wallonie-Bruxelles International and the BFI Audience Fund