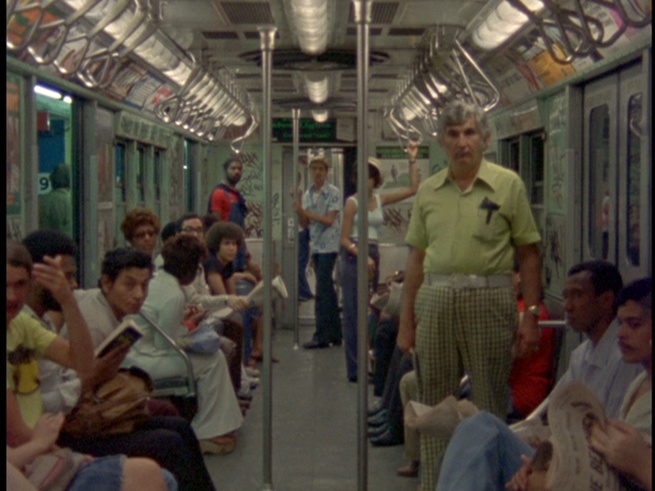 A Nos Amours continues a retrospective of the complete film works of Chantal Akerman with News From Home (1976), a film that engages with her mother, with absence and displacement.

Akerman returned to New York in 1976, having blazed a trail in Europe with her extraordinary Jeanne Dielman. She was travelling with letters her mother had written to her during her first extended stay in the city – in 1972 - when she had encountered and so profoundly engaged with Michael Snow’s work and shot her own Hotel Monterey and La Chambre. These letters would provide the soundtrack for a new film (News From Home): accounts of daily life, life as lived in distant Belgium, invoked by means of observation and parcels of news. These are thoughts and feelings shared by a mother with her very distant daughter (before Skype!).

Image-wise, the new film would show New York, its streets, subways, denizens. There are city streets framed by tall buildings, subways and diners, some tracking, not much. The citizens going about their business take notice or not. Sounds might be in synch or not. This is not a smart city: it is a city of ghettos and decline.

Mother and daughter comment and conjoin: 'I live to the rhythm of your letters', or, 'you always write the same thing and I have the impression you don’t say anything'. Who is addressing whom is no simple matter.  Absence  and displacement are the invariable themes.

Akerman has described her murmuring voiceover as psalmody (the singing of psalms or similar sacred canticles, especially in public worship), which perfectly evokes the prayerful effect, the mingling of longing, the provoking of guilt, and the offer of love. The closing scenes, scenes of departure and voyage, play without the presence of the voice, without complex maternal comfort.  Such an absence allows perhaps for a new note of optimism – to proceed one must depart.