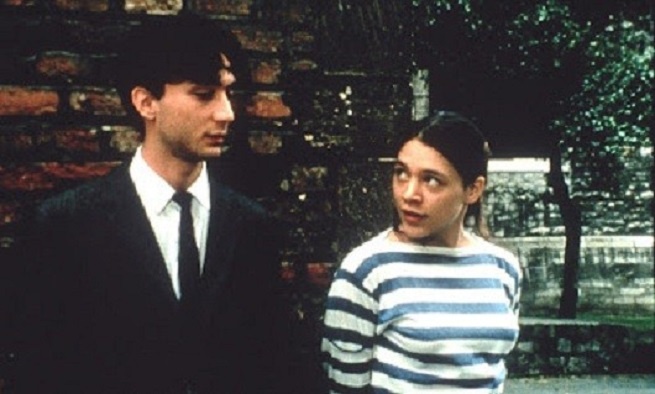 This screening of shorts is part of the continuing Chantal Akerman retrospective presented by A Nos Amours.

Commissioned by Channel 4 for Visions strand, which offered film makers and artists a carte blanche.

Every filmmaker must raise money for their project. Even the author of Jeanne Dielman is not exempt. Here Chantal takes the camera for a trip to Los Angeles, in search of a rich uncle who may have a cheque book. He may be rich, but will he be found?

Aurore Clément is welcoming, above all eager to get Chantal's help with a rehearsing for her part in another film. The battle to pronounce 'cheated' without the inevitable mispronouncing of a French speaker takes up all their energy. Her American companion, an actress, complains bitterly about the casting process, usually a matter of intimate meetings late at night. Meanwhile word is received: Chantal's uncle has gone to New York. Like Alice, Chantal must chase her white rabbit.

Commissioned by Amnesty International as part of a portmanteau project to highlight the fate of the murdered, the detained and the tortured.

Akerman's contribution is dedicated to an El Salvadorian trade unionist, a mother of three, murdered by the US-backed junta. Catherine Deneuve emerges from the calm of a Parisian night to deliver a heartfelt a plea for the significance of Febe Elizabeth's life, that there be some remembering of her too short life and her orphaned children. Sonia Wider-Atherton's cello weeps appropriately.

To quote Judith Mayne, who exactly captures the delightful manner and audacity of this delicious film:

Chantal Akerman's 1993 film… is a beautiful and haunting evocation of female adolescence and its discontents desire, loss and the complicated, ambiguous relationship to the transitions between girlhood and womanhood... Portrait of a Young Girl is in many ways a coming out story, for the love of one girl for another moves the film forward... But it will come as no surprise to those familiar with Akerman's work that this is no transparent coming out tale, and that the film resists any of the simple oppositions between inside and outside, past and present, before and after, which are suggested by the very term 'coming out'.

Rather, this explores how lesbian desire is both shaped and repressed by the codes and conventions of heterosexual romance. On the surface, the could be described as a somewhat conventional girl-meets-boy tale. But what shapes the girl-meets-boy story is the simultaneous desire, for the girl, to connect to another girl and to tell stories. ln other words, this is a lesbian narrative with a difference; girl still meets boy, but that classical and timeworn plot is the pretext for the connection between two girls.