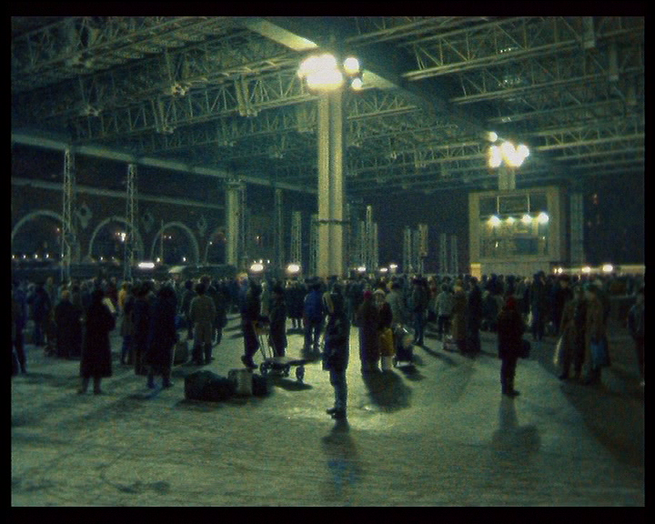 D’Est is a wordless winter travelogue through the countries of Eastern Europe, from East Germany, through Poland and the Baltic states, across Russia towards Moscow and its cavernous terminal stations.

The Soviet era has gone, a collapse leaving behind a seemingly stunned, endless waiting populace. The film begins with a series of late summer images, at the beach, or lazily in the park. Winter threatens. Long lines of anonymous people, suggestive of resignation and an unfathomable fortitude. Akerman’s camera tracks these lines, catching the stamp of frozen feet, the hunch of shoulders bearing the cold. Domesticity life is a silent one though sentimental songs can be played on a gramophone and may be company of a sort. Sausage and bread and salt are on the supper menu for one. Even the grand terminal stations of the capital serve only to lend the waiting crowds a new kind of insignificance.

Bleak, for sure, but beautiful image-making and laying our of materials, the deft and caring work of a great artist.

It is hard not to think of Samuel Beckett in this absorbing study of human futility, especially the exchange from Endgame: Clov: “If I don't kill the rat, he'll die”… Hamm: “That's right.”