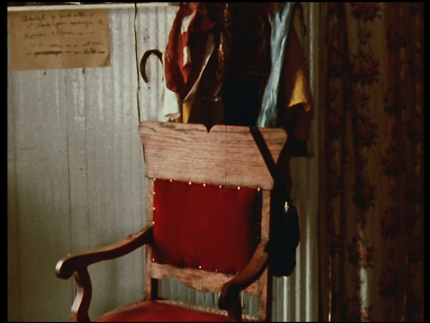 A Nos Amours continues a retrospective of the complete film works of Chantal Akerman, with two short films and her breakthrough feature length film of 1972 Je Tu il Elle

Chantal Akerman is a filmmaker whose time has come. Akerman's work is superficially wide-ranging—spanning documentary and narrative, film and video, 16mm and 35mm, cinema and art gallery—and yet her work is characterised by an uncompromising and singular sense of purpose.

What Akerman shows us, by means structural and otherwise, is nothing less than the human condition, a series of astonishing mediations on loneliness and anxiety, alienation and discomfort. She began inspired by Godard, but quickly established a startling and provocative project that is among the very greatest in European film. As J. Hoberman has said: 'Comparable in force and originality to Godard or Fassbinder, Chantal Akerman is arguably the most important European director of her generation'.

Read an article by Adam Roberts from A Nos Amours on the ICA Blog, In Defence of Akerman’s L’Enfant Aimé →

Powell and Pressburger once wrote 'no true artist believes in escapism.' They could have been writing about the films of Chantal Akerman. Her movies give cinema heft. They have the rigour of a Poussin painting. She looks longer and harder than most directors, and almost seems to stop film's flicker. - Mark Cousins

A Nos Amours is grateful to the Belgian Embassy, to Picturehouse, to the ICA, to the Royal Belgian Film Archive and to Paradise Films