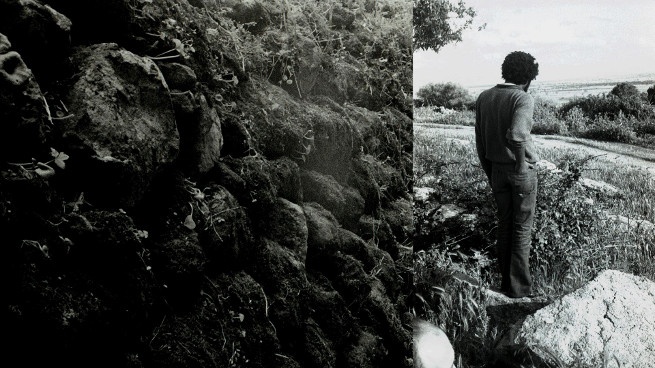 A special presentation of three video essays by London-based The Otolith Group (Anjalika Sagar and Kodwo Eshun), followed by a discussion with Kodwo Eshun.

In the Year of the Quiet Sun takes its name from the decrease in solar surface temperature that occurs every eleven years. From November 1964 to November 1965, the nation states of the world issued postage stamps to commemorate the first scientific expedition to study the sun. As the stamps turn their face towards the sky, they overlook the unstable land of Africa’s newly independent states, confronting the astronomical time of the quiet sun with the political calendar of Pan-Africanist conferences in Accra, Addis Ababa, Bandung, Berlin and Casablanca.

Anathema reimagines the microscopic behaviour of liquid crystals undergoing turbulence as a sentient entity that possesses fingertips enthralled by the LCD touch-screens of communicative capitalism. In isolating and recombining the magical gestures of dream factory capitalism, Anathema proposes itself as a prototype for a counter-spell assembled from the possible worlds of capitalist sorcery.

People to be Resembling is a pentagonal portrait of Codona, the post-free jazz, pre-world music trio founded by multi-instrumentalists Collin Walcott, Don Cherry and Nana Vasconcelos in 1978. In its arrangement of positive and negative stills with colour and black and white moving images and original compositions by Charles Hayward, People to be Resembling reimagines the process of recording as a meditation upon permutation and cohabitation.

The Otolith Group were founded by Kodwo Eshun and Anjalika Sagar in London in 2002. Their work encompasses video, installation, exhibition making and publications. Recent solo exhibitions include In the Year of the Quiet Sun, CASCO, Office for Art, Design and Theory, Utrecht and Medium Earth, REDCAT, Los Angeles. Recent group exhibitions include Cut to Swipe, Museum of Modern Art, New York and The Anthropocene Project. A Report, Haus der Kulturen der Welt, Berlin. The Otolith Group were nominated for The Turner Prize in 2010.