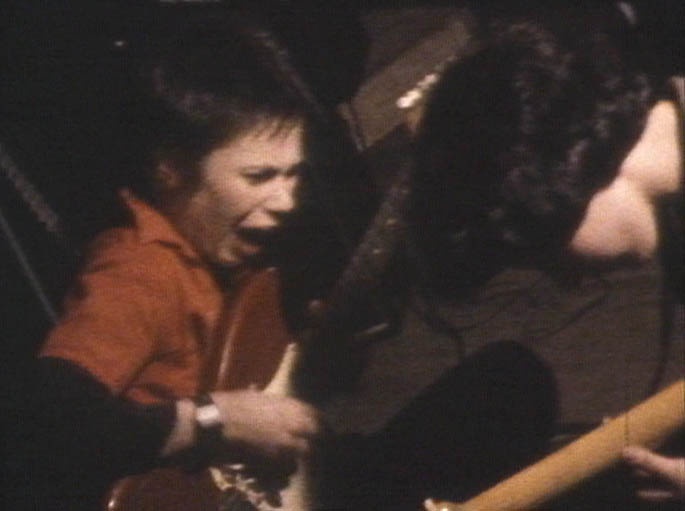 Vivienne Dick was born in Donegal in 1950 and studied at University College, Dublin. Between 1977 - 1982 she lived in New York, part of a group of filmmakers whose affiliation to the music and aesthetic of punk became known as 'No Wave'. Working mainly on Super 8, Dick's films from this period feature many musicians from the punk movement in NY with performances and music from Lydia Lunch, James Chance, Pat Place, Adele Bertei, and Ikue Mori.

Dick returned to Ireland in 1982 and then to London in 1985, where she was a member of The London Filmmakers Coop for many years. She currently lives in Ireland where she continues to work with moving images. Her work has been screened widely at festivals and museums including The Whitney Biennale, IMMA New York and Dublin, Tate Britain, and The Pompidou Centre. She has received a number of Production Awards from the British and Irish Arts Councils. Her work is in the collections of The Museum of Modern Art, Anthology Archives and The Irish Archives. She was elected member of Aosdana in 2007. She continues to make and show films and lives and teaches in the West of Ireland.

Guerillere Talks, Video, 24 mins, USA 1978
Vivienne Dick's arrival in 70s New York, landed her in the middle of the punk era. This first film uses eight rolls of Kodak sound Super-8 film to profile each woman in real time and without any editing. Each is captured on film in a screentest to which the camera is co-conspirator rather than voyeur. The 'subjects' include Pat Place and Adele Bertei, former band members of The Contortions, as well as Lydia Lunch, singer, guitarist, film-star and punk doyenne.

She Had Her Gun All Ready, 16mm, Video, 28 mins USA 1978
Vivienne Dick's second film has at its centre two of the 'subjects' of her first film Guerillere Talks. Moving from a kitchen on the Lower East Side of Manhattan, the film explores the dynamic between a complacent, almost catatonic Pat Place and the demonic, aggressive Lydia Lunch, ending with a showdown at the rollercoaster on Coney Island.

Staten Island, Video, 4 mins, USA 1978
“An androgynous creature wearing a tacky silver suit emerges from the sea on a rubbish strewn Staten Island beach. The mood is post-apocalyptic and the music of Telstar mixed with domestic kitchen clatter.” –V.D.

Beauty Becomes The Beast, Video, 40 mins, USA 1979
Using fragmented images of women and a central performance from Lydia Lunch as both a tormented five year old and a troubled teenager, this film looks at the mother and daughter relationship and examines the cyclical relationship between the two. Images of patriarchical culture contrast with those of the sexually precocious 'child-girl' who oscillates between being a child crying for her mother and adopting a position of maternity in relation to her doll.

Liberty’s Booty, Video, 47 mins, USA 1980
Vivienne Dick's last film in her New York period draws a parallel between prostitution and the desire for success so prevalent in American cultureThe film is unsentimental in its depiction of prostitution, showing the relationships between the Madam and the call-girls, who speak frankly about their lives. Cultural references to the 1960s are made through the use of rock anthems, whilst the ultimate all-American girl “the Statue of Liberty“ is seen performing a striptease.

Visibility: Moderate, Video, 38 mins, USA 1981
Vivienne Dick's first film after the New York series takes her back to her native Ireland. Using Super-8 film as a parody of the 'travelogue' or home-movie style film, Dick takes an expatriate, tourist look at her homeland. The narrative follows an American tourist trekking from a Dublin populated by Hare Krishnas and rock music, to the horse-drawn carriages in the west of Ireland and the kissing of the Blarney stone. The quaint perception of Ireland and the Americanization of the native culture are contrasted with interviews from sectarian prisoners and footage of political marches.

Like Dawn To Dust, Video, 5 mins, USA 1983
Lydia Lunch laments the difficulty of relationships in the wilds of Connemara, Ireland. The opening shots of a decaying 'Big House' bearing the scorch marks of a fire, are accompanied by an off-key piano (from "Dance Of The Dead Children" off the 13.13 album). The house is abandoned but for the figure of Lydia Lunch, wearing her signature New York 'Goth' make-up and clothes. Lunch delivers a poetic monologue, both on screen and in voice-over, over a traditional soundtrack and her final words emphasize the circularity of Irish narratives: 'the past never dies, it just continually repeats itself'.

All works courtesy of Lux, an arts agency which explores ideas around artists' moving image practice through exhibition, distribution, publishing, education and research.