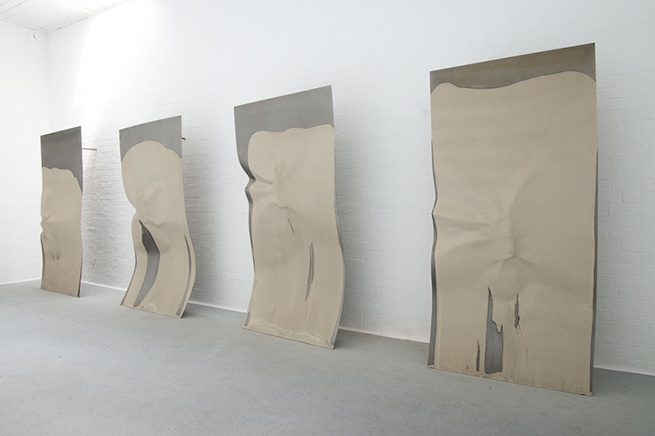 Pandora Lavender’s practice is an investigational approach to the bringing out of potentiality – through destruction and dislocation, of deforming matter and objects beyond their origin, purpose, and fixity in order to bring about something ‘other’.

The work ‘no one is one but only one of’ undoes materiality through the acts of triggering a physical threat. The making of this work involved releasing the bucket from the tip of a digger, and as it descends, it collides and indents the steel below. Repeating this process with many separate pieces of steel – each situation of the bucket dropping, induced alternating impressions on the steel. Even though the process was regulated – the temperamental nature of external (natural) elements marks the repeated differences. A repetition exists that is reliant on difference (rather than being opposed to it). The pregnant sound, the 'interruptions', the repetitions enable the limits of the practice to be intangibly navigated. There is no concern with success and failure – the focus is on regulating denial – the denial of intentions, precision, a process and a hierarchy. The work has an existence as a presentation of energy; in which gravity acts as an anti-form. Planning and chance should have no fixed identity – it is this obscuring of things, the assimilation of the deliberate and the accidental that push the practice.

There is an agreement that energy will be that of loss, the process of making one of denial, destruction and reconstruction substitutable. Reason, planning, chance, mistakes and dead ends become entangled – and it is this entanglement of suspended activity that produces objects as by-products. The actions within the work can only aim to navigate the boundaries of the practices limitations. It is not a matter of situating these limitations, the point and the edge, but a matter of opening them up, so they encourage a collapsing – a collapsing of materiality, finality and form.