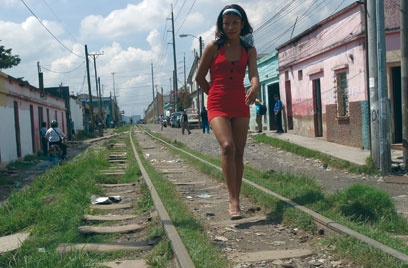 Exhilarating, endearing, and often deeply humorous, The Railroad All-Stars features Valeria, Vilma, and Mercy, three prostitutes in search of a better life. The women live and work in La Linea, a destitute neighborhood next to a railroad track in Guatemala City that houses poor families and is overrun by thievery, gangs, and prostitution. Fed up with the abuse they get from customers, lovers, and the police, they decide to take matters into their own hands and form a soccer team, “Las Estrellas de la Linea,” in hopes of bringing attention to their plight. After the first game against a local high school team, Las Estrellas are banned from future competitions on account of their profession; however, this controversy brings enormous media attention—precisely what the women were hoping for. Filmmaker Chema Rodriguez exhibits a strong bond with his characters, drawing out their exuberance and inspiring strength as they fight for their most basic human rights and a better life through the most unusual of channels — soccer.