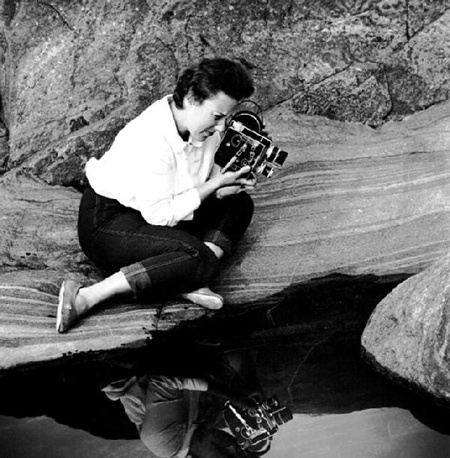 Heikki Aho’s daughter Claire is the unifying figure for this second programme of shorts. Featuring as a child in films such as Elokuvaaja Kesälomalla, which depicts a peaceful pastoral family fishing holiday, she later joined her father and uncle behind the camera. As shown in Laulu Meren Kaupungista – a vibrant portrait of maritime Helsinki commissioned by the City – she shared their aesthetic preoccupations, and maintained the status of the family business with films promoting the 1952 Helsinki Olympics. Jean Sibelius Kodissaan, meanwhile, completes an arc of Aho & Soldan productions on the Finnish master composer, commemorating him through idyllic images of the country landscape surrounding Sibelius’ villa ‘Ainola’.

The intersection of artistic and industrial creativity which forms a central theme in Aho & Soldan’s work finds its peak in this silently lyrical documentary of the paper-making process in Finland. From the felling of trees in the snow, to the spooling reams of paper in the factories, to the replanting of forests which recommences the cycle, the various stages are captured in a visual manner that approaches abstraction, presenting a large-scale manufacturing process as an object of aesthetic appreciation.