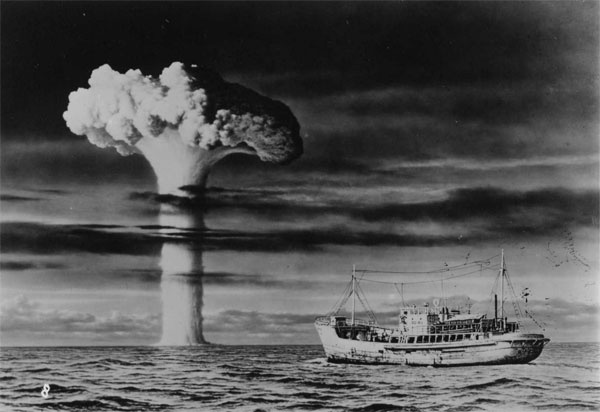 On 1 March 1954, the 23 tuna fishermen crew members of the fishing boat Lucky Dragon No. 5 were exposed to radioactive fallout following U.S. hydrogen bomb testing near Bikini Atoll in the Marshall Islands, with the boat's chief radio engineer dying six months later. The incident gave rise to Japan's most legendary movie monster, Godzilla, who appeared on the nation's screens later that year in the film of the same title directed by Ishirô Honda. Fewer people know, however, that the incident was given a less fantastical treatment five years later by Kaneto Shindô, one of the most crucial figures in postwar Japanese independent cinema. Best known in the West for his atmospheric allegorical ghost tales Onibaba (1964) and Kuroneko (1968), the Hiroshima-born Shindô made the first ever fictional film to deal directly with the A-bombings of Japan, Children of Hiroshima (1952), and a number of his films broach issues surrounding the horrors associated with the nuclear attacks. Zipangu Fest is proud to present this rare UK screening of the powerful docudrama about this real-life tragedy.

Director Bio
Born 1912, Hiroshima, Kaneto Shindô is a respected screenwriter and independent director with a career spanning over seven decades and 45 films, with his most recent, Postcard, released this year. He started his career in film as a set designer at Shinkô Kinema's Tokyo studios, which he entered in 1935. After the war he moved to Shochiku where he gained an impressive reputation as a scriptwriter, but left the studio in 1950 to form the company Kindai Eiga with Kôsaburô Yoshimura. His first film as a director was Story of a Beloved Wife (1951), starring Nobuko Otowa, who would become the director's wife and would feature in many of his subsequent films. A number of Shindô's films focus on the legacy of the atomic bombing of his hometown, including Children of Hiroshima (1952), Mother (1963) and Sakuratai 8.6 (1988). His best known titles as a director include Naked Island (1960), Onibaba (1964), Kuroneko (1968), Kokoro (1973) and the documentary Kenji Mizoguchi: The Life of a Film Director (1975). His screenplays include Mikio Naruse's The Dancer (1951); Yasuzô Masumura's Manji (1964) and Irezumi (1966), and Kinji Fukasaku's Under the Flag of the Rising Sun (1972).