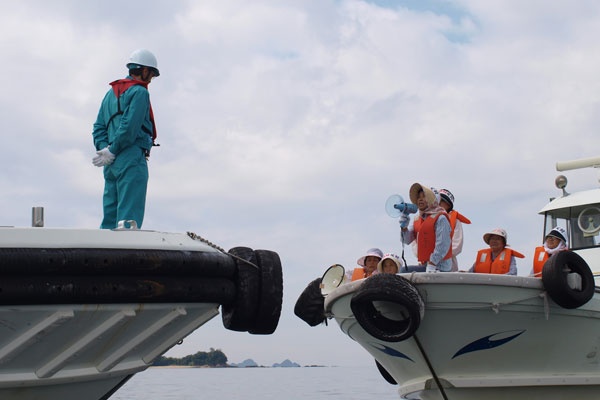 The dangers of nuclear power have resurfaced in the public consciousness as a reality with tangible consequences in the wake of Japan's earthquake and its aftermath earlier this year. Ashes to Honey, the final part of a trilogy of films directed by Hitomi Kamanaka (the second of which, Rokkasho Rhapsody, is also screening as part of Zipangu Fest ), was screening in cinemas in Japan the day its ground shook, a bitter and timely reminder of the urgency required to face the problems that are raised in this documentary. Kamanaka observes the demonstrators of the island of Iwaishima and their 28-year struggle against the construction of a nuclear power plant on its shores. The islanders' endeavours are juxtaposed with the situation in Sweden, where the public's desire for the use of sustainable energy sources have led to the possibilities of eco-friendly lifestyle choices since 1980. The accelerating imminence of the problems raised and Kamanaka's own fear and rage force an emotional resonance and activist urgency into a genre that is often deemed to require objectivity, a refreshingly welcome approach akin to the best of Noriaki Tsuchimoto's Minamata documentaries.

Director Bio
Hitomi Kamanaka is a documentary filmmaker and media activist who has been dealing with nuclear issues for over a decade. Upon graduating from Waseda University, Kamanaka studied at the National Film Board of Canada and worked as a media activist at Paper Tiger in New York. Her documentaries have received critical accolade and awards from many international film festivals. Her films Hikabukusa - At the End of the World (2003), about the ravages of radiation in Iraq from depleted uranium contamination following the Persian Gulf War, Rokkasho Rhapsody (2006) and her latest Ashes to Honey (2010), comprise a feature-length trilogy about the dangers of nuclear power.