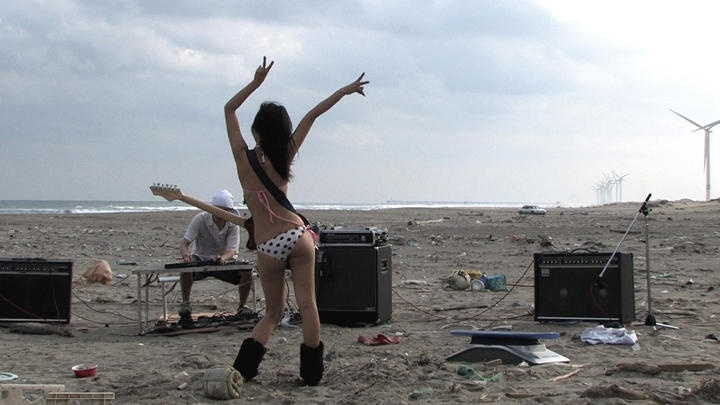 We Don't Care About the Music Anyway...

'Rather than a film about music, we like to think of We Don't Care About Music Anyway... as a film about sound and its perception. A eulogy to raw and spontaneous creation, below codes and industry, creation as an animal way to express a rage that cannot be put into words.'

Directors Cédric Dupire and Gaspard Kuentz's film documents the foremost talents in contemporary Japan's notorious, infamous and much-admired avant-garde music scene. Featuring sound-bending turntables by Yoshihide Otomo, abrasive cello action by Hiromichi Sakamoto and noise-jams on the beach by Umi No Yeah Orchestra, the documentary records the cacophonic acts that blur the borderline between noise and music, sound and dissonance, to push the boundaries of acceptability into unexplored realms.

Dupire and Kuentz includes interviews, panel discussions and exclusive live performances to present a study of the music scene that is renowned worldwide as the best for its genre. As Peter Meanwell writes in The Wire magazine, 'It's hard to imagine a better soundtrack to Tokyo.'

Inspired by his first encounter with traditional Rajasthani music, Cédric Dupire made his debut in 2005 with Musafir, the first in a series of documentaries questioning the link between music and its environment. This he followed with L'homme qu'il Faut à la Place qu'il Faut (2008), a portrait of the celebrated Guinean djembe player Fadouba Oularé. We Don't Care About Music Anyway… is his third film.

Born in 1981, Gaspard Kuentz entered the Film School of Tokyo in 2003, directing the short film Chinpira Is Beautiful in 2005, before joining Cédric Dupire to make this first documentary.