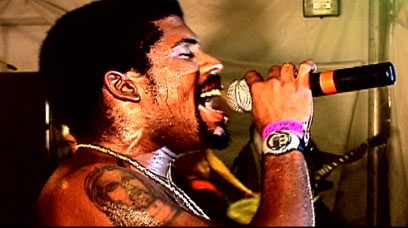 A pulsating documentary that tells a powerful story of redemption, re-invention and revolution. Set in Rio de Janeiro's most feared and violent favela (slum), the film follows the story of Anderson Sa, a former drug-trafficker who turned his back on crime to re-connect with his community. Having seen friends and family members murdered, Sa decided to fight back against the teenage drug armies and corrupt police force turning everyday life into a never-ending cycle of violence and tragedy.

Bringing together a group of like-minded social revolutionaries, Sa created 'AfroReggae', a movement as well as a live act that mixes hip-hop, Afro-Brazilian dance and the rhythms of the street. The band become a positive force for change, creating cultural programmes to inspire favela youth who would otherwise join the ever-growing armies of drug-dealers. However, things take an unpredictable turn when a tragic accident threatens to throw the AfroReggae bandwagon off course.

Directors Zimbalist and Mochary tell this memorable, exciting story with great skill, allowing the protagonists, locations and music full expression as the narrative powers to a tense conclusion. The sheer energy on display here perfectly reflects the lifeforce of the film's remarkable subjects - Anderson Sa and AfroReggae - making for one of the most important, emotive and entertaining documentaries in years.