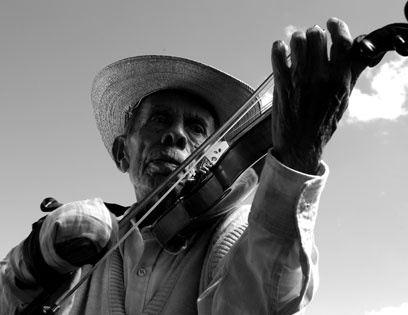 Don Plutarco, his son and his grandson are musicians and humble farmers, but also support an armed guerrilla movement seeking social justice for the peasant farmers. When the army seizes the village, the rebels flee to the Sierra hills, forced to leave behind their crucial stock of ammunition. While the guerillas organize a counter-attack, Plutarco executes his own secret plan. Hoping to gain access to his cornfield where the ammunition is hidden, he presents himself as a harmless violin player to the military occupying the village. In a stroke of luck, his playing charms the ruthless army captain, who confiscates the violin and orders Plutarco to return daily to play. Plutarco has music, but needs ammunition. The captain wants to stifle the rebellion, but loves music. As the days pass, arms and music enter a dangerous contest that can only end in betrayal.