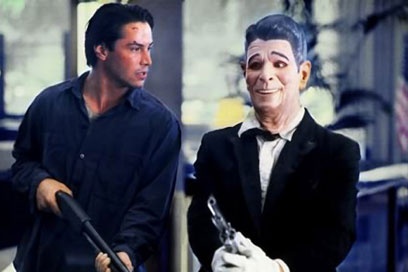 "To give viewers the full method experience of Hot Fuzz I proudly give the Institute Of Contemporary Arts the brain melting experience of seeing the same.

"Witness two of the most gloriously OTT cop movies of all time in the shape of Kathryn Bigelow's cult classic Point Break and Michael Bay's Bad Boys II, his valiant attempt to trash as many cars as possible in the space of 147 minutes. Which is quite a lot.

"But which film is the more gleefully insane? Keanu Reeve's Eff-Bee-Ai agent on the trail of a gang of wild wave riding, sky diving bankrobbers or Will Smith and Martin Lawrence laying waste to bad guys of every ethnic persuasion in an equal opportunity rampage against Haitians, Cubans and the KKK.

"Only you can be the judge.

"But let this be known. Point Break contains the best footchase in cinema history and Bad Boys II the finest car rampage since The Blues Brothers.