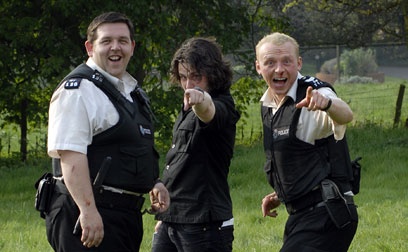 A full evening's entertainment with a special preview of Hot Fuzz, a much-needed 'bar break' and a late screening of firm Fuzztival favourite The Super Cops.

Simon Pegg, Nick Frost and director Edgar Wright – the makers of Shaun of the Dead – are back together for a fabulously funny and fast-paced action-comedy. Pegg plays Nicholas Angel, a top London cop who’s so good that he makes his fellow officers look bad. Banished to a sleepy, seemingly crime-free village Angel soon finds himself up to his badge in bodies, though he has a hard time convincing his new colleagues that they’re dealing with murder. The style of a Hollywood action-thriller is crossed with the sensibility of the team’s enduringly popular TV series Spaced, creating a sharp, surprising and endlessly entertaining comedy.

Edgar Wright will DJ in the bar between films.

A vivid, little-seen New York cop thriller from the ‘70s with a plot that’s a direct influence on Hot Fuzz. Based on the true story of police partners whose maverick style was so effective that it earned them the nicknames Batman & Robin, as well as landing them in trouble by showing up their corrupt colleagues. Screening as part of the Hot Fuzz Preview double-bill.

Edgar Writes on The Super Cops: "Move over Joel Schumacher, these are the real adventures of 'Batman & Robin'. Little seen and hugely underrated, this serio-comic crime caper was Gordon Parks' follow up his two hugely successful Shaft films.

Based on the true life exploits of NYPD officers David Greenberg and Robert Hantz, dubbed 'Batman and Robin' by New York reporters, the film falls somewhere between the corruption scandal of Serpico and the absurdist humour of Catch 22.

The great screenplay is scripted by none other than Lorenzo Semple Jnr who is also responsible ironically for the 1966 Batman TV Series and the 1980 version of Flash Gordon. It also features a hilarious performance by Ron Leibman; a fantastic actor who something of a minor cult icon thanks to parts in this, The Hot Rock, Slaughterhouse Five and more recently Garden State. He was also reportedly the fiery inspiration for Michael Dorsey in Tootsie. If you've only seen Leibman as Rachel's Dad in Friends, then catch him cleaning up Manhattan and kicking a whole lot of ass. The cult of Ron Leibman starts here!"