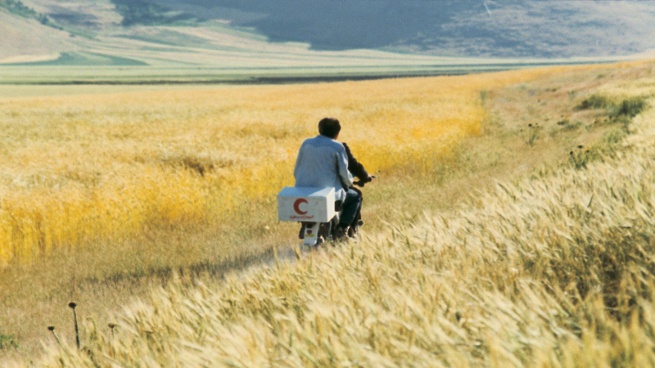 Abbas Kiarostami Focus: The Wind Will Carry Us + Intro

"[Kiarostami] offers an intricately constructed spatial world that's as breathtakingly beautiful, as various, and as cosmically evocative as a Brueghel landscape" — Jonathan Rosenbaum

This film is introduced by journalist and critic Maya Jaggi.

Cannes Palme d'Or winner, the film documents the arrival of an engineer and his colleagues from Tehran in a remote village in Iranian Kurdistan. Assumed by the locals—with whom they form an ambivalent relationship—to be archaeologists or telephone engineers, the visitors' behaviour and keen interest in the health of an ailing old woman seem strange and their true motives are shrouded in mystery. Haunting and visually stunning, The Wind Will Carry Us is an absorbing, abstract meditation on life and death and the divisions between tradition and modernity.

Maya Jaggi is an award-winning cultural journalist, critic and festival director, who writes for FT Weekend, Guardian Review and other publications, and contributes to the BBC. As a leading arts-profile writer for The Guardian for more than a decade, she interviewed filmmakers including Abbas Kiarostami, Costa-Gavras and Ousmane Sembène. Educated at Oxford University and the LSE, she was awarded an honorary doctorate from the Open University in 2012 for ‘extending the map of international writing’, and was a DAAD fellow in Berlin in 2014. Most recently, she was Artistic Director of Where Europe Meets Asia: Georgia25, a week of writers’ talks and films in London in April 2016 to mark 25 years of Georgian independence.