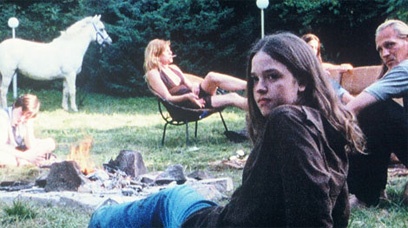 The German title, meaning misbehaving or unruly children, provides an added flavour to the milieu of this film. It applies more to the wayward parents and their slacker cohorts than to Stevie, the wild but fiercely intelligent adolescent at the emotional heart of the film. Stevie and her mum, Lily, are reunited with Stevie's father Axel, in Germany after his spell in jail for drugs trafficking. Much to her disappointment, instead of returning home to Portugal, the family takes up residence in Lily's deceased father's large suburban house. Ignorant of Stevie's growing needs, they bring in a collection of nefarious bedfellows and spend most of their time high, basking in the golden hues of late summer evenings. Meanwhile, Stevie searches deeply for some meaning to her life, leading her into scrapes of her own. Semi-autobiographical and winner of a Tiger Award at the Rotterdam Film Festival, The Unpolished shows us a squalid image of the fall-out from a counter-culture gone bad. What shines through is the resilience and resourcefulness of a girl who deserves, and is determined to get, something better.