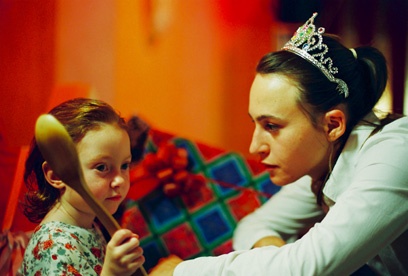 Husband and wife team Etgar Keret and Shira Geffen may just be the golden couple of Israeli cinema right now following the success of Jellyfish. The film, which was awarded the prestigious Camera d'Or at Cannes for best debut, is a multi-strand take on life in modern-day Tel Aviv. Keret and Geffen, who were already acclaimed writers in Israel prior to their move into filmmaking, weave a hypnotically cinematic meditation on life and all its absurdities. Using short, perfectly framed vignettes to forward the story, Keret and Geffen's look at family dysfunction and failed personal lives should, at first glance, be depressing. A newlywed couple find their honeymoon interrupted when the bride breaks her leg climbing out of a locked toilet. A young girl emerges from the sea one day into the arms of a heartbroken stranger, recently split up from her boyfriend while in another strand a Filipina maid has to wordlessly connect with her charge, an elderly woman who has been neglected by her aspiring actress of a daughter. Instead what emerges is an endlessly surprising, poignant work imbued with the calming sorrow, and wonder, of the sea's deep blue which provides so much of the film's tone and hue.