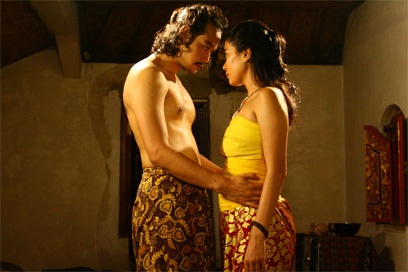 Under the Tree (Di Bawah Pohon)

Indonesian master Garin Nugroho is one of the few directors who hates repeating himself: the form, theme and setting of each of his films is different. So it's no surprise that he follows Opera Jawa with a film about contemporary women, or that he sets it in the distinctive culture of the ancient|modern holiday island Bali. He interweaves the stories of three unrelated women, only one of them a Balinese native. The superstitious Maharani, who was adopted as a child and knows nothing of her birth parents, comes looking for a mystical understanding of motherhood, but finds herself caught up in a baby-trafficking racket. The 40-year-old Dewi is pregnant, but a scan reveals that her foetus is malformed and would die soon after birth; she agonises over having an abortion. And the airhead teenage celebrity Nian flees to Bali when her father is arrested on corruption charges; she latches on to a surrogate 'father' in the person of the elderly artist Darma, only to find that he's risking his life by performing in a Balinese death ritual. Social realism meets mysticism, topical commentary meets poetry.