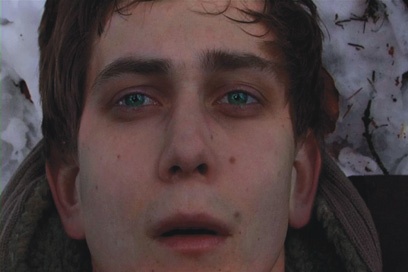 How to sum up Un Lac? It's no easier than with Sombre or La Vie nouvelle, the two last films by Philippe Grandrieux. Suffice to say that Grandrieux has been hotly acclaimed on both sides of the Atlantic as one of Europe's most innovative and uncompromising filmmakers, his visionary films testing the very limits of screen language. This minimalist new work is at once Grandrieux's most accessible film and his most abstract. The vestigial narrative takes place in a frosty Northern landscape of forests and mountains, where young woodchopper Alexis lives with his sister, their blind mother and a younger brother. Then one day a younger man arrives on the scene... Grandrieux doesn't make events easy for us to follow, often shooting in near-darkness, with sparse dialogue sometimes pitched barely above a whisper. But narrative apart, the film is distinctive for the unique, self-enclosed world that Grandrieux creates with a palette reduced almost to monochrome: a world of stillness and near-silence, of forbidding yet alluring landscapes whose affinities are as much with the Romantic paintings of Caspar David Friedrich, as with the cinematic ilk of Alexandr Sokurov, Bela Tarr and Fred Kelemen.